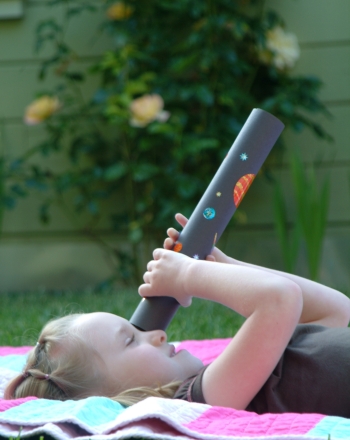 You’ve probably heard the rhyme, “Twinkle, twinkle, little star, how I wonder what you are.” Answering this question in terms that a five-year-old can grasp may not be as hard as you think. In a nutshell, everything in the sky is either making light or reflecting light. Stars make light, while the moon and planets reflect light. Your child will likely be fascinated to know that our own sun is a star. And come nighttime, you and your child can enjoy gazing up at the night sky together without any special equipment needed. Astronomy is the perfect activity to enjoy with your child (and the whole family!) on those warm, clear spring and summer nights.

While you won’t be able to see any far out planets with an empty paper towel roll, it will help your child focus on what they are looking at. To make this homemade “telescope,” have your child paint the paper towel roll and decorate it with stickers of the stars and planets. Getting your child involved in the process will build anticipation for the evening.

Some constellations are easier to see than others. Ursa Major, "The Great Bear," is the most popular constellation because it is visible in the Northern Hemisphere year round. The Big Dipper is actually not a constellation at all, but part of the Great Bear. And the North Star, Polaris, is not the brightest star in the sky, but a very important one. Because of where it sits in the sky it appears not to move, making it the marker to find north from many places on Earth! Orion, "The Great Hunter," is another favorite of junior astronomers and easily visible from January through April. Teaching your child the legends behind the constellations may also help them remember what to look for and get excited about it along the way. For example, Orion is the great hunter of the night sky traveling with his two loyal dogs—the constellations Canis Major and Canis Minor. The three stars which make up Orion’s belt that hold his sword are easy to spot. And from there you can locate an array of other constellations.

You will probably have to let your child stay up a little later than usual, but lying in the backyard, standing on the porch, or even looking out the window at the night sky will be an experience well worth it! It will take your eyes 30–40 minutes to adjust to the darkness, so be patient. As your child looks up at the stars with their handmade telescope, ask your child, “What do you see in the sky?” Explain that the stars make pictures called constellations, and that constellations are used to help people remember which stars are which. Check out the brightest star in the sky, Sirius, part of the Big Dog constellation.

On a clear, dark night, you can see between 1,000 and 1,500 stars with the bare eye. Point out a few constellations but also encourage your child to find their own pictures in the sky. If they were an astronomer, what would they name them?

This is a fun way to introduce the beginning concepts of astronomy and get your child excited about something science-related. It’s also a great way to spend a spring or summer night with the whole family involved.

Color the Backyard Scene
Worksheet
Color the Backyard Scene
This fun coloring page features a backyard scene complete with barbecue, picnic table, and play area.
2nd grade
Worksheet
Backyard Field Guide
Activity
Backyard Field Guide
Combine your child's natural curiosity with his developing classification and writing skills by helping him create a backyard field guide.
2nd grade
Reading & Writing
Activity
Color A Mandala: Backyard Birds
Worksheet
Color A Mandala: Backyard Birds
This mandala is made up of birds you might see in your backyard. How many do you recognize?
1st grade
Worksheet
Earth Rotation
Worksheet
Earth Rotation
Challenge your child's knowledge of astronomy with this space-themed worksheet, which focuses on the timing of cosmic events.
2nd grade
Science
Worksheet
Color the Trampoline Scene
Worksheet
Color the Trampoline Scene
This fun coloring page features a high-hopping girl on a backyard trampoline.
1st grade
Worksheet
Sun Coloring Page
Worksheet
Sun Coloring Page
Your child can decide with this sun coloring page, the perfect way to introduce her to astronomy!
2nd grade
Science
Worksheet
Mason Jar Planter
Activity
Mason Jar Planter
Jazz up your patio or backyard with hip and quirky planters made from simple Mason jars.
2nd grade
Science
Activity
Count the Insects 2
Worksheet
Count the Insects 2
Add some backyard bugs to your child's counting practice with this colorful worksheet.
kindergarten
Math
Worksheet
Count the Insects 4
Worksheet
Count the Insects 4
Your child will practice counting up to five with backyard bugs he already is familiar with.
kindergarten
Math
Worksheet
Easter Number Fun #6
Worksheet
Easter Number Fun #6
The Easter Bunny has hidden colorful eggs all over the backyard! Find them all by putting numbers in the proper order.
1st grade
Math
Worksheet
Make Your Own Stepping Stones
Activity
Make Your Own Stepping Stones
Re-use old plastic food containers to create these uniquely beautiful stepping stones to embed in your backyard!
2nd grade
Arts & crafts
Activity
Coffee Can Stilts
Activity
Coffee Can Stilts
If you have a young child who loves physical stunts, try making these coffee-can stilts for backyard fun.
kindergarten
Arts & crafts
Activity
See this activity in a set: Summer in Space
We enable strictly necessary cookies to give you the best possible experience on Education.com.Cookie policy