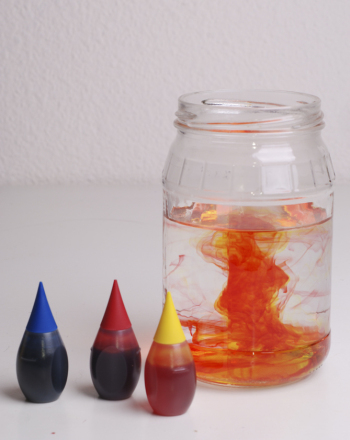 For most kids, Fourth of July fireworks are a highlight of the holiday. Who doesn't love those magnificent and exciting explosions of color? This activity is a great way for your child to make her own fireworks, without the danger of course, and celebrate the holiday with a bang!  Your child will have fun and she'll even learn some science too!

When you pour the food coloring into the oil and shake it, the two will mix briefly, but the mixture is quite unstable at this point. Then, when you pour the oil onto the water, it will break up at first, but as you continue to watch, you'll see the oil molecules find one another and begin to come back together. Finally, the water-soluble (meaning "water-liking") food coloring finds its way out of the oil, and heads back into the water, one color at a time, offering an extra art lesson in the ways that primary colors combine and separate. In the spirit of adventurous scientists everywhere, you can encourage your child to try this experiment several times, with lots of colors!