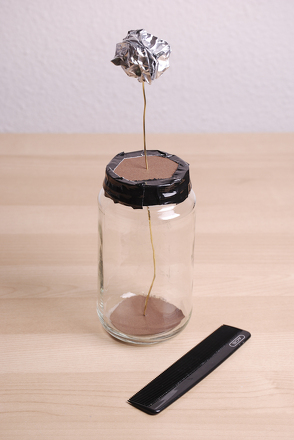 If the air is dry enough, the ends of the Mylar strip fly apart when the comb or balloon touches the ball.

An electroscope shows the attraction and repulsion of electrical charges. In all electrical activity, like charges repel and opposite charges attract. When you rub the comb, friction causes a positive charge to build up in the plastic. When you hold the positively-charged comb near the aluminum foil ball, the comb attracts negative charges which move up through the wire so that only positive charges remain in the Mylar strip. Since both ends of the strip now have the same charge, the ends of the strip fly apart!

Blow It Out!
Activity
Blow It Out!
Air invisible; it doesn't make sounds; you can't pick it up and throw it. So how do we know it exists? Help your second grade scientist figure it out.
2nd grade
Science
Activity
Search It Out
Worksheet
Search It Out
Help familiarize students with plural word forms as they search them out in this plural word search.
preschool
Reading & Writing
Worksheet
Sort It Out
Worksheet
Sort It Out
Find out with this sorting assessment.
preschool
Math
Worksheet
Stretch It Out
Worksheet
Stretch It Out
In this worksheet, students practice stretching out all the sounds in words based on picture clues.
1st grade
Reading & Writing
Worksheet
Point It Out
Worksheet
Point It Out
In this activity, students will point out each word with different items to practice one-to-one correspondence.
preschool
Reading & Writing
Worksheet
How Much is a Billion?
Worksheet
How Much is a Billion?
Help kids understand the size and scope of billions of years with this helpful reference worksheet.
3rd grade
Science
Worksheet
Map It Out
Workbook
Map It Out
...Map It Out Grab your compass and coordinatesâitâs time for a trip!...
2nd grade
Workbook
Sound It Out
Workbook
Sound It Out
...Sound It Out The first step to becoming a great reader and writer is to learn the sounds of all the letters!...
preschool
Reading & Writing
Workbook
Work It Out
Lesson plan
Work It Out
...Read aloud the text Talk and Work It Out (Learning to Get Along) by Cheri J. Meiners M.Ed....
kindergarten
Lesson plan
Color It Out
Lesson plan
Color It Out
...Then, demonstrate how another student would say the word stretching out each sound. Count on your fingers all of the sounds as you stretch out the word....
kindergarten
Reading & Writing
Lesson plan
Sort it Out!
Lesson plan
Sort it Out!
...Explain that it means to give the group a name. Write out these words with the definition on the board....
1st grade
Math
Lesson plan
Act it Out!
Lesson plan
Act it Out!
...Pass out paper to your class, and encourage everyone to figure out the number of eyes total using drawings....
kindergarten
Math
Lesson plan
We enable strictly necessary cookies to give you the best possible experience on Education.com.Cookie policy