How Windy Is It? A Weather Science Experiment 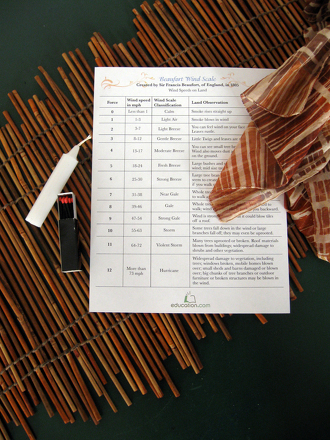 Weather is a common part of the second grade curriculum, and of any second grader’s life, too! Here’s a real-life science activity that explores wind speed. Your child can use it to learn about big winds that make the news, like those in hurricanes, or to become familiar with the concept behind wind power.

Here’s a modified version of the Beaufort Scale:

3. Take your child outside, and bring a light scarf, matches, and candle. Start by lighting your candle, and watch what happens. Does it stay lit? Does the smoke rise vertically, or drift to the side? Use the data to start evaluating the wind outdoors according to Beaufort’s scale. Then hold the scarf up. Does it dangle? Blow in the breeze? Finally, look all around. What are the trees doing? Grasses? Where does it all fall in the Beaufort scale today?

Note: You will obviously want to avoid taking your second grader outdoors for the last two categories, but we represent them here so that you will have a frame of reference the next time you hear a news report, or in case a big storm warning is forecast for your area.

4. Repeat this experiment, every day for a week if possible. Then try checking your results against the weather page in a newspaper. Forecasters usually offer reports of local wind speeds on land, and on water as well if you live near an ocean or lake. How close can you and your first grader get to these expert observations? No matter what, it's good science—and good fun, too.