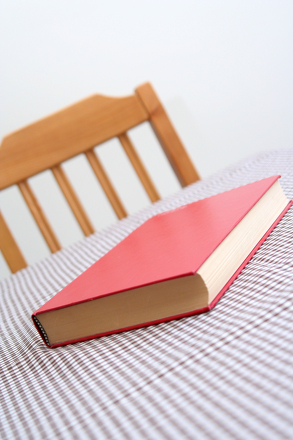 There’s nothing like a parlor magic trick to pique the interest of students. Have your child try this classic trick. Not only is it fun to perform and impressive to watch, but it's a great example of Newton’s First Law of Motion at work!

As with everything, there are several science concepts at work, but the key concept is Newton’s First Law of Motion. Ask your aspiring magician to recite Newton’s First Law. She should say something similar to:

An object at rest remains at rest and an object in motion remains in motion, in a straight line, unless it is acted upon by an outside force. This is also known as the concept of “inertia.”

Have her explain how this law applies to the trick. The book is at rest: due to its inertia it will stay at rest unless something makes it move. By pulling the cloth (applying an outside force) we expect the book to move and in fact, it will move if the cloth isn’t pulled quickly enough. There is friction between the book and the cloth, so if the cloth is not pulled quickly the book will move with the cloth. By applying enough momentum to the cloth, the friction between the two objects is overcome and the book remains at rest. Because of friction, the book will move slightly before it comes to a complete rest again (can you spot this motion?) and the better the trick is performed, the less noticeable the motion becomes. Presto!

Newton's First Law of Motion
Worksheet
Newton's First Law of Motion
Show what you know about Isaac Newton’s First Law of Motion with this physical science matching activity!
6th grade
Science
Worksheet
Physics Magic Trick
Activity
Physics Magic Trick
Delight your budding scientist with this cool physics magic trick and teach her some basic physics concepts while you're at it!
2nd grade
Science
Activity
Cast a Writing Spell
Worksheet
Cast a Writing Spell
This goofy magician is about to perform a magic trick! Let your aspiring wizard determine what trick the magician is about to perform.
2nd grade
Reading & Writing
Worksheet
A Mathematical Card Trick
Activity
A Mathematical Card Trick
Teach your kid a fun mathematical magic trick! All you'll need is a deck of cards and basic addition, subtraction, and multiplication skills.
4th grade
Math
Activity
Newton's Second Law
Worksheet
Newton's Second Law
Why is it harder to throw a bowling ball than it is to throw a beach ball? The answer is in Newton's second law of motion!
5th grade
Science
Worksheet
Newton's Third Law
Worksheet
Newton's Third Law
Well, according to Newton's third law of motion, he does!
5th grade
Science
Worksheet
Law of Gravity
Worksheet
Law of Gravity
Discover some of the fascinating properties of gravity by studying one of Newton's famous laws, the Law of Gravitation.
5th grade
Science
Worksheet
Make a Magic Leprechaun Pouch
Activity
Make a Magic Leprechaun Pouch
Here's a fourth grade magic trick to celebrate St. Patrick's Day, with a little practice in using the literary device of alliteration, too.
4th grade
Arts & crafts
Activity
Perpetual Motion Machine
Science project
Perpetual Motion Machine
The goal of this science fair project is to attempt to build a perpetual motion machine and analyze the Laws of Thermodynamics.
Middle school
Science project
Easy Magic Tricks for Kids
Worksheet
Easy Magic Tricks for Kids
Try out some of these easy magic tricks for kids.
3rd grade
Worksheet
History of Law
Worksheet
History of Law
Here's a history quiz that is sure to stump even the most studious civics buff! Fill in the blanks, and learn a bit about the history of written law.
Social studies
Worksheet
Motion of the Ocean
Worksheet
Motion of the Ocean
Have your preschooler trace the curved lines in the picture to mimic the motion of the ocean in order to practice pencil coordination.
preschool
Reading & Writing
Worksheet
We enable strictly necessary cookies to give you the best possible experience on Education.com.Cookie policy