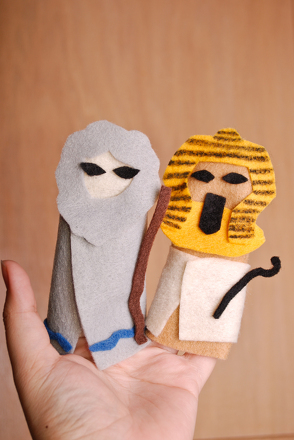 Finger puppets encourage creative play, communication and they provide you with a great opportunity to share the Passover story with your kids in a way that won’t bore them to tears. Even better: they’re a snap to make. Once Passover is over, you can recast the puppets as fairy tale characters or anything else your child might enjoy.

Need a refresher as to what happens in the Passover story? See below for a summary to share with your child while making the puppets.

A long time ago in Egypt, the Hebrew people were slaves of the Egyptians. Moses was born to a Hebrew family. When Moses was a baby, the king of Egypt, who was called the Pharaoh and who was cruel to his slaves, ordered that all the Hebrew baby boys be killed. To save her son, Moses's mother made him a basket of reeds and sent him floating down the river. He was rescued by the Pharaoh's daughter, who brought him up as her own son and a prince of Egypt.

When Moses grew up, God came to him in the form of a burning bush and told Moses to set his people free so that they would no longer be slaves of the Egyptians. Moses was nervous at first, but he agreed to do what God wanted and went with his brother Aaron to ask the Pharaoh to let the Hebrews go free. The Pharaoh refused over and over again, and every time he said "no," God made something bad happen for the Egyptians. Finally, Moses warned the Pharaoh that if he didn't let the Hebrews go free, God would kill all the first-born sons of the Egyptians. The Pharaoh still said, "No," so Moses and Aaron showed the Hebrew people how to mark their doors with sheep's blood so that the angel of death would know to "pass over" those houses and not kill the boys inside. (That's where the name Passover comes from.)

When the Pharaoh's own oldest son died, the Pharaoh finally agreed to let the Hebrews go. But at the last minute, he decided to chase them down and bring them back to be slaves. God helped the Hebrews by parting the Red Sea so they could cross safely and then letting the water crash down on the Egyptian soldiers who were chasing them. The Hebrews were free! You can read the whole story of Moses in the Torah, or the Old Testament, in the book of Exodus.