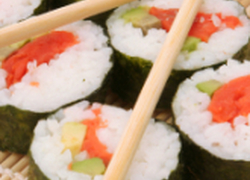 There was a point when your kids' idea of a cultural experience was digging a hole to China in the backyard. Now that they're in middle school, however, kids are ready to enjoy the finer points of cultural exploration, like how people live, work - and especially eat - in other countries. You've probably started them early on pizza and pasta, but the most fun, versatile, and easy-to-make foreign delicacy is Japanese fast food, otherwise known as sushi.

To most people, “sushi” means “raw fish,” but this is not necessarily the case. In Japanese, the word “sushi” means “rice snack,” and the word has come to describe anything from kani (crab) to cucumber and carrot rolls. If your child would sooner eat mud than raw fish, explain that you can make sushi out of anything, especially if you're doing it in your own kitchen!

Here's what you'll need for a sushi-making party:

Download free activity
Subject
RecipesMains
Thank you for your input.

Avocado Sushi
Activity
Avocado Sushi
Does your child love sushi? How about creating something a little different with these avocado sushi bites that have a little cucumber too!
5th grade
Activity
Tally Chart: At the Sushi Counter
Worksheet
Tally Chart: At the Sushi Counter
The chef made a lot of sushi today during lunch. Can your child help him figure out how much sushi he made by filling in the table with tally marks?
1st grade
Math
Worksheet
Sushi Coloring Page
Worksheet
Sushi Coloring Page
No matter whether your adventurous eater prefers maki, nigiri or inari, she will surely think this sushi coloring page looks delicious!
2nd grade
Worksheet
Simple Machines at Home
Activity
Simple Machines at Home
Give your budding young observers a chance to discover simple machines at use in their own home.
4th grade
Science
Activity
Activities That Foster Learning at Home
Worksheet
Activities That Foster Learning at Home
Use these engaging activities to foster learning at home!
Preschool
Math
Worksheet
At-Home Mood Meters
Worksheet
At-Home Mood Meters
In this social emotional worksheet, young learners will practice recognizing and communicating emotions by creating their own mood meter to use at home.
Kindergarten
Worksheet
10 Activities to Support Learning at Home
Worksheet
10 Activities to Support Learning at Home
Use these engaging activities to encourage everyday learning opportunities at home!
Kindergarten
Math
Worksheet
Sentence Writing: Home
Worksheet
Sentence Writing: Home
What is your favorite hiding place at home? Practice writing sentences by filling in the blanks to answer questions about home.
1st grade
Reading & Writing
Worksheet
About My Home
Worksheet
About My Home
What makes a house a home? Have some fun exploring your home with your little learner.
1st grade
Social studies
Worksheet
What’s Going on at Home?
Worksheet
What’s Going on at Home?
Help your kindergarteners get ready to read as they work on their picture comprehensions skills with this fun home-themed worksheet.
Kindergarten
Reading & Writing
Worksheet
Writing Home
Worksheet
Writing Home
Imagine you're out on the Gold Rush, mining in fields worlds away from home. What would you write in a letter back home?
4th grade
Social studies
Worksheet
Make a Medieval Shield!
Activity
Make a Medieval Shield!
Got a jousting knight at home? Try this project and help him make his very own shield.
4th grade
Arts & crafts
Activity
We enable strictly necessary cookies to give you the best possible experience on Education.com.Cookie policy