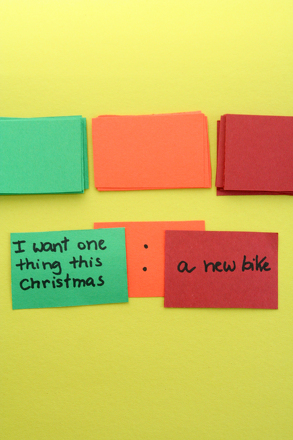 Want to give your child some writing practice over the holidays? Why not play the Santa “Clause” game? This activity will have your child learning about dependent and independent clauses, not to mention the punctuation that goes in the middle. By matching Christmas clauses, she’ll get a slice of learning along with her figgy pudding!

Step 1 Both you and you child should each come up with ten or more clauses having to do with the holidays, and make sure that you have a mix of independent and dependent clauses, and that some contain conjunctions. For example: I want one thing this Christmas: a new bike. Mom and Dad sometime sleep in on Christmas morning, but I always wake up early. Christmas is my favorite holiday; it always seems to make everyone feel happy. Each clause should be written on its own piece of paper, but don’t include the colon or semicolon on the card. With each rectangle representing a separate paper, it should look like:

Step 2 On the six cards of a contrasting color, label two with a comma, two with a semicolon, and two with a colon. Place them in a pile, face-down, between the two players.

Step 3 Place the “clause cards” you have created face-down between the two players, and mix them up.

Step 4 Play the clause game! To play, each player takes turns turning over one of the punctuation cards. They then must match two clause cards that might use that punctuation mark. For instance, if you draw a comma card, you first turn over one clause card. You then have three chances to turn over another clause card that works with the first and with the comma to form a sentence. Sound easy? You may have “clause” to think otherwise!

Rhyme Connection 34
Worksheet
Rhyme Connection 34
...When she's finished matching, she can use one of the rhyming words to answer a bonus question at the bottom of the page....
preschool
Reading & Writing
Worksheet
Skip Counting
Worksheet
Skip Counting
Children will enjoy skip counting from 34 to 50 in this sweet early math worksheet.
kindergarten
Math
Worksheet
Play the Rose Garden Coloring Game!
Worksheet
Play the Rose Garden Coloring Game!
Play this coloring game any time you need a break.
preschool
Worksheet
Play the Easter Egg Hunt Game!
Worksheet
Play the Easter Egg Hunt Game!
Take some time off to play the fun Easter game with your child.
1st grade
Worksheet
Play the Senses Guessing Game
Activity
Play the Senses Guessing Game
In this fun guessing game, your child uses his sense of smell and taste to figure out what is in the container. Here's how to play:
kindergarten
Science
Activity
Play the Build a Monster Game!
Activity
Play the Build a Monster Game!
Play this game that lets you create your own silly monster drawing and helps your child practice her counting skills!
kindergarten
Math
Activity
Play the "Know it All" Game with Mom!
Activity
Play the "Know it All" Game with Mom!
Try a fun Mother's Day game for moms and kids to play together!
4th grade
Activity
Christmas Dot-to-Dot 1
Worksheet
Christmas Dot-to-Dot 1
Kids will practice counting from one to 34 in this Christmas dot-to-dot. Once your child connects the dots, he'll have a ringing Christmas bell to color!
kindergarten
Math
Worksheet
Non-Identifying Clause and Commas
Worksheet
Non-Identifying Clause and Commas
What's a non-identifying clause? It's just a part of a sentence that gives extra info. See where to put the commas with this punctuation worksheet!
3rd grade
Reading & Writing
Worksheet
Santa Tracker
Worksheet
Santa Tracker
Track Santa's movements across the globe with this Santa-tracking worksheet.
1st grade
Arts & crafts
Worksheet
Handprint Santa
Activity
Handprint Santa
This handprint Santa is a great way for your little one to get in the Christmas spirit. Make a handprint Santa with your child this holiday season.
kindergarten
Arts & crafts
Activity
Santa Mask
Activity
Santa Mask
This Santa mask is a fun way to celebrate Christmas with your kindergartener. Make a Santa mask to bring a little cheer to your Christmas season.
kindergarten
Arts & crafts
Activity
We enable strictly necessary cookies to give you the best possible experience on Education.com.Cookie policy