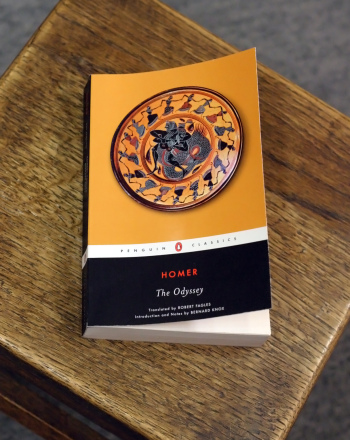 Who remembers their ancient Greek history? No volunteers? Here's a teen-friendly refresher course in the plot of the epic poem The Odyssey, as well as SAT vocabulary your teen can use to describe what happens for themselves.

If The Iliad, in simplest terms, is the story of the Trojan War, then The Odyssey is the story of the journey back. The epic poem centers on Odysseus, King of Ithaca, husband to Penelope, and father to Telemachus. When the poem opens, all the famous heroes of the Trojan War are accounted for - home or dead - except Odysseus. His long absence has not gone unnoticed. In fact, every single man who believes himself to be a potential suitor for Penelope is now camped out on the grounds of her castle, ready to court her and take over the throne, should the opportunity present itself.

This situation is not only upsetting for Penelope but also for poor Telemachus. He believes his father is still alive and trying to get back to Ithaca, and is soon prompted into action by the goddess Athena. The goddess helps Telemachus stand up to the suitors, and sends him in search for word of his father. Telemachus discovers that his father is the love slave of Calypso, and she refuses to let him go. (How hard do you think he’s trying, really? This is the guy who came up with the Trojan Horse; he can’t get away from a nymph?)

Through divine intervention, Calypso is forced to release Odysseus and allow him to return to Ithaca. Odysseus sets out on the sea for his voyage home forgetting that he has completely annoyed Poseidon, god of the sea, and once Poseidon becomes aware that Odysseus has dared to travel his waters, he sends a huge storm to destroy him. However, Athena protects Odysseus, and he  ends up shipwrecked on the shore of Scheria.

Luckily the people of the island are kind, and Odysseus is taken in by the king and queen. But they don’t know his true identity. During a meal, the musician plays a song about the Trojan War which causes Odysseus to weep uncontrollably. His hosts, the king and queen, become suspicious. Odysseus tells them who he is, and they beg to know how he has come to be in their kingdom. He then tells them the story of his adventures on the sea, recounted here in the form of the lessons our hero should have learned from each near death encounter:

“The Island of the Lotus-eaters” – If a stranger gives you a strange plant and says, “Here, eat this,” never do it! I cannot stress this enough.

“Polyphemus the Cyclops”- If you are captured by a Cyclops who eats several of your men, and you have the incredible luck to escape by blinding his one eye, resist the urge to shout out your name as you are fleeing. The Cyclops may turn out to be the son of a very important deity, who will consequently be very put out.

“Aeolus, the Old Wind Bag” – If the keeper of the winds gives you a bag of winds to help you in your journey home, do not keep the contents of it a secret. Your men will surely open it just when you are in spitting distance of home thus blowing you thousand of miles away.

“The Laestrygonians” – Avoid all giants.

“Circe” or “All Men are Pigs.” - If a woman drugs you and your men and then turns you into pigs; don’t be so quick to judge. She just may be a very sweet person having a really bad day; she might even end up saving your life one day – especially if you insist on putting yourself in constant peril.

“Tiresias, the ancient Greek’s GPS” – If only one person in the known universe can tell you how to get home, you just may have to go to Hell and back for directions. So quit whining.

“That Siren Song” – Obviously, seductive women are harmful to your health.

“Scylla and Charybdis” – If you are stuck between a rock and a hard place, or a perilous whirlpool and a man-eating six headed monster, put the six guys who have been slacking on their chores in front. It’s a great motivational tool for the others.

“Respect the Sun”- If you are stranded on the Sun’s private island, convince your men to eat sand before pilfering his private stock.

“And then there was One” – If your rebellious crew eats the cattle of the Sun and your entire crew and ship are destroyed by Zeus as a punishment - take a vacation. Ogygia is lovely this time of year, even if the nymphs are a little bit clingy.

By this time, the king and queen completely regret asking Odysseus about his journey and quickly pack him a ship and provisions in the hopes that he will never tell his story again.

Useful vocabulary in a conversation about the journey of Odysseus:

Finally, Odysseus reaches his home island of Ithaca, but rather than going directly to the castle, he stops at the hut of Eumaeus. Once again disguised by Athena, (who must really appreciate the element of surprise) Odysseus pretends to be a beggar and seeks shelter.

Athena guides Telemachus to Eumaeus’s hut and removes the beggar’s disguise so that Telemachus can see his father in all of his heroic splendor. They exchange hugs and immediately begin plotting the demise of the suitors. Odysseus will enter the castle in the disguise of a beggar. Once he is there, he and Telemachus will wait for the right moment to begin the bloodshed.

Odysseus returns to his own castle, and the suitors are obnoxiously rude to him. Odysseus enjoys the thought of killing them all for their disrespect. Telemachus erupts in anger at the suitors for being so rude to his, err - uh, guest. Penelope looks suspiciously at the beggar her son has defended. Later that night, as the suitors enjoy the sleep of drunken idiots, Odysseus and Telemachus remove all of their weapons and seal them away. The suitors will be completely at their mercy - excellent.

The next day, Penelope finally proposes a solution to the suitors - the man who can string the great bow of Odysseus and shoot an arrow through twelve axes will become her next husband and take over as King of Ithaca. This, incidentally, is a feat that only Odysseus has ever been able to complete. Think Penelope has a little something up her sleeve?

Each suitor takes his turn and each one fails. W all the men are exhausted, the beggar steps up to take his shot. The suitors, looking forward to making fun of his failure and healing their own injured egos, happily urge him to try. But the beggar, our own Odysseus, steps up confidently, strings the bow easily and shoots through all twelve axes.

And there was much rejoicing!

Sorry, not yet - Odysseus, now armed with his trusty bow turns to the unarmed suitors and slaughters, with the help of Telemachus, each and every one of them. Finally, drenched in blood, the happy family enjoys a loving reunion.

Useful vocabulary in a description of the climax:

The next morning over bacon and eggs, Odysseus suggests that they may want to lay low for awhile as they have just slaughtered the son of every noble family in the country. There is bound to be some hurt feelings. They journey to the home of Laertes, Odysseus’s father, and after the old disguised-as-a-beggar trick, father and son have time to exchange a hearty handshake, before the knock at the door.

The families of the suitors have tracked Odysseus down, and they demand vengeance, or at least a really good explanation for the cruel murders of their sons. Just in the nick of time, Athena arrives and decides that this story has become way too violent. So she gives each member of the families a memory wipe. They forget the whole messy business … and there was much rejoicing.