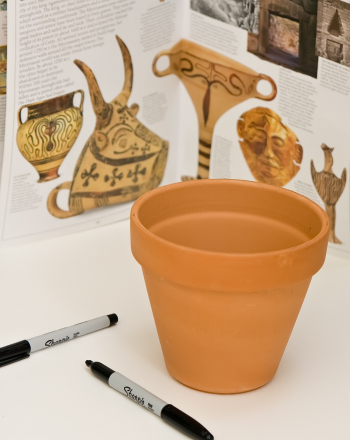 When is a vase just a vase and when is it art? Can it ever be both? In ancient Greece, vases were not only utilitarian but they were also visual masterpieces. Decorating a vase in the style of the ancient Greek artists isn't difficult at all; all you need are a few basic materials and your imagination. So grab your supplies, find a space to work, and get ready to go back in time!

Hands-on activities like this are a great way to spark your child's interest in art history and ancient cultures by bringing the subject to life. Reading about Greek vases in a textbook can be dull, but making your own is a lot of fun!

There were a number of steps to making and decorating a vase in ancient Greece. After the potter shaped the vase on a pottery wheel and allowed it to dry, the designs were painted on using a slip that would change color when fired. Additional details could be incised after the pot was fired or added using a special glaze. Greek vases are one of the most important artifacts left to us by this ancient culture because they reveal not only the culture’s values and beliefs, but they also serve as a reminder of what highly advanced and skilled craftspeople the Greeks were.