Make a Balloon Stick to the Wall Like "Magic" 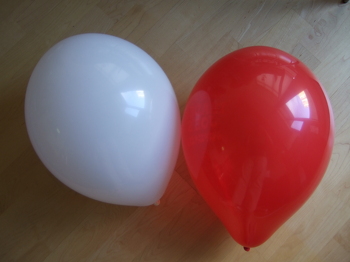 Have you ever seen a balloon magically stick to something? Getting balloons to stick to objects through static electricity is classic trick, but it never ceases to amazing young children. You might have seen someone get balloons to stick to hair, giving the person a head full of static. This trick uses the same principals to get a balloon to stick to a piece of wool fabric. Skip the tangled hair, and watch your kids be amazed.

If you try to leave the balloon on the wall, eventually it will fall to the ground. In this case, the static charge dissipates over time, causing the balloon to lose its negative charge and unstick itself.

The two balloons will stick together if one is charged in the same way the balloon sticks to the wall. However, two negatively charged balloons will repel each other.

Make a Traditional Indian Wall Hanging
Activity
Make a Traditional Indian Wall Hanging
Your child will create their very own traditional Indian Toran wall hanging using construction paper, yarn and paint.
3rd grade
Social studies
Activity
Balloon Air Pressure Magic
Activity
Balloon Air Pressure Magic
Get your sense of humor ready for this fun science experiment that demonstrates the fundamental physics of air pressure.
3rd grade
Science
Activity
Design Challenge: Inflate a Balloon
Activity
Design Challenge: Inflate a Balloon
In this exciting design challenge, your child will use design thinking skills to find a solution that can inflate a balloon.
3rd grade
Science
Activity
Magic Squares
Worksheet
Magic Squares
Complete the magic squares! The sum across each row and down each column must be the same as the sum along each diagonal.
3rd grade
Math
Worksheet
Magic Square Cutup
Worksheet
Magic Square Cutup
Arrange the numbers in the magic square so that the sum of the numbers in any direction is 15.
3rd grade
Math
Worksheet
Vinegar and Baking Soda Balloon
Activity
Vinegar and Baking Soda Balloon
Set your young chemist up for an afternoon of science-fueled magic with a deceptively simple activity starring baking soda and vinegar!
3rd grade
Science
Activity
Easy Magic Tricks for Kids
Worksheet
Easy Magic Tricks for Kids
Want to impress and amaze your friends? Try out some of these easy magic tricks for kids.
3rd grade
Worksheet
Make Block Prints... Like Rembrandt
Activity
Make Block Prints... Like Rembrandt
Make beautiful print block art with your kids using recycled materials.
3rd grade
Arts & crafts
Activity
Balloon Trick
Activity
Balloon Trick
Celebrate April Fools' Day with a science prank that is sure to amuse...and educate too!
3rd grade
Science
Activity
Build a Popsicle Stick Bridge
Activity
Build a Popsicle Stick Bridge
Inspire your child to put on her engineer hat for the day, as she builds her very own, double-decker bridge.
3rd grade
Science
Activity
I Like Myself
Lesson plan
I Like Myself
Students will explore self-esteem through the book I Like Myself by Karen Beaumont.
2nd grade
Lesson plan
Make a Haunted House
Activity
Make a Haunted House
Learn how to make a haunted house with this Halloween craft. See how to make a haunted house with a project that is fun for ghosts and ghouls alike.
3rd grade
Arts & crafts
Activity
We enable strictly necessary cookies to give you the best possible experience on Education.com.Cookie policy