Solve the Mystery of the Unpoppable Balloon! 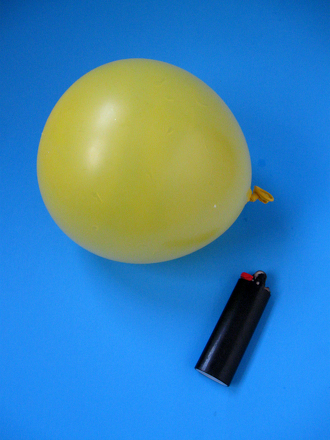 Calling all science detectives! Here's a mystery that may leave you stumped. The scene: two balloons, both held up to the same flame, react in two completely different ways. How can this be? Try this experiment and see if you can solve the mystery of the unpoppable balloon!

This fascinating science experiment brings the concept of heat transfer explosively to life and is sure to leave your curious young detective intrigued. Not only will this experiment help deepen your child's understanding of an important scientific concept, but it will also give him a chance to exercise his powers of observation and deduction as he works to solve its mystery.

Caution: this activity requires the use of an open flame. Safety goggles and adult supervision are a must!

The answer to the mystery of the unpoppable balloon lies in the process of heat transfer. When something hot (the flame) comes into contact with something cooler (the balloon), thermal energy transfer, or heat exchange, occurs.

What does that mean for our two balloons? In the first experiment, the balloon absorbed the full intensity of the flame's heat because the air inside the balloon had little effect on the transfer of thermal energy. Unable to withstand the intense heat, the balloon started to melt and then literally disintegrated.

And what was that black substance on the second balloon? It was carbon, which forms as a by-product of the burning, or combustion, process—just as the wood in your campfire turns black before it is consumed.