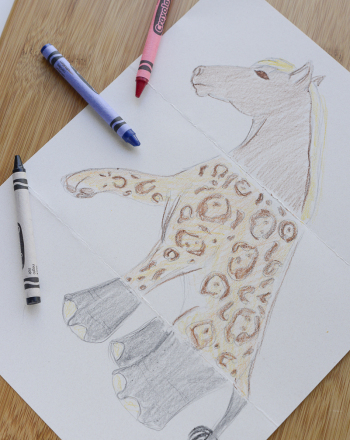 Autumn weekends bring early sunsets, falling leaves, and that tell-tale dripping sound outdoors. There's nothing like a child pent up in the house to drive a parent crazy! Banish your child's rainy day boredom by guiding his play group through this collaborative art project that leads up to the unveiling of a crazy creature! Children will have a blast  working collectively as each one draws one-third of his favorite animal or creature, folds the paper over, and then passes it on. Watch the giggles erupt as the final product is revealed!

To extend this activity further, encourage the children to name and create stories for their oddball creatures! Elicit further creativity by asking them where a giraffe-dolphin-pig creature might live. What kind of terrain and food would it need to survive?