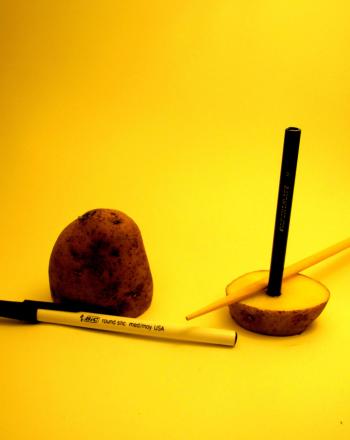 We often throw stuff in the air when we are celebrating. You see confetti at New Year’s, rice (or bird seed) at weddings, but what about St. Patrick’s Day? These flying potato poppers make a cool sound, create a celebratory mood, and they can teach your 4th grader about the power of air pressure. Just make sure she doesn’t point her popper directly at anyone. You can save the poked potatoes and use them to make an Irish supper.

The power of the popper comes from the air inside that is suddenly compressed by the chopstick plunger. This activity might be more fun with several kids, and several potato poppers. Prizes can be awarded to the children with the potato pieces that goes the farthest. Have the kids sweep up afterwards.