Make Your Own Maccabee Shield 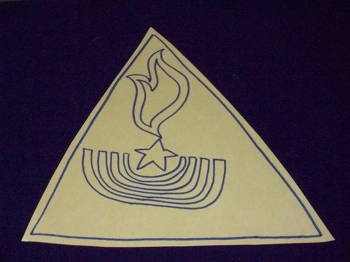 When the Jewish people living under the rule of Antiochus in Egypt during 2nd century B.C. were forced to abandon their beliefs and worship Greek gods instead of their own, many Jewish people and priests were upset. Judah Maccabee lead a group of followers, called the Maccabees, through a series of battles. They finally escaped from their rulers and returned to Jerusalem, bringing the Temple back to its Jewish roots of worship. Jonathan Maccabee was then named high priest and ruled over the holy lands. Today, Hanukkah is a celebration of this victory.

This activity blends the history of the Maccabee revolt with a creative project for your children. By using cardboard to cut out his own shield, your child will refine his motor and conceptual skills. The shield itself will be shaped like a triangle and will help your child to recognize this geometric shape. Your child's important fine motor skills will further come into play as he paints the insignia of the Maccabees on its surface.

With your child's Maccabee shield now complete, encourage him to let his imagination soar and to play with his new shield to his heart's content!