Compete in the Maccabiah Games 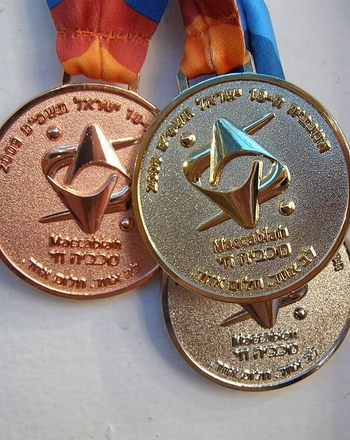 This game is not only perfect for paying tribute to all of the Maccabiah athletes (and Maccabees of the past), but in helping your own child (and friends) develop her own athletic abilities and coordination. Finally, at the end, she will hone her math skills as she totals up the scores to declare the winner!

The very first Maccabiah Games were played in 1932 and dreamed up by Yosef Yekutieli, when as a fifteen year old he witnessed the 1912 Olympic Games. He wanted to bring this same structure to the Jewish Community and looked to unite his people to earn money to build the stadium that would hold the games. By traveling to neighboring countries, such as Syria, Turkey, France, Belgium, Egypt, Greece, Scotland, Austria, and more, Yosef earned enough to build the stadium of his dreams in Tel Aviv, and named it Maccabiah Stadium. The first games were comprised of only track and field, football, and swimming, but today the schedule of events is that of the Olympic Summer Games. The 2009 games brought athletes from 51 different countries to take part of the 31 events. The term Maccabiah derives from the revolt that was lead by Judah Maccabee and his Maccabee army to bring the Jewish faith back to his people and reclaim their sacred temple. It is because of this event that we celebrate Hanukkah today!