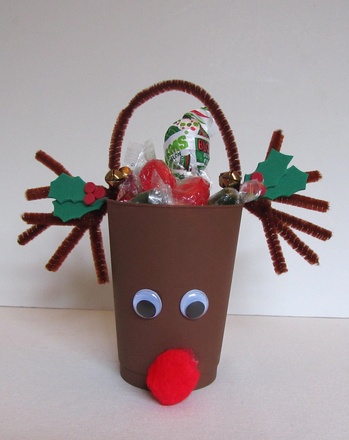 In this activity, youngsters can create adorable treat cups featuring the likeness of everyone’s favorite reindeer, Rudolph! Your kids will beam with pride as they present candy, snacks, or other surprises in these adorable handmade containers. They're perfect for house parties, school celebrations, and holiday bake sales. With a little adult assistance, junior crafters will find that making these adorable containers is a cinch!

Who created Rudolph the Red-Nosed Reindeer? It was a man named Robert L. May who worked in advertising for a store called Montgomery Ward. In 1939, May was asked to come up with a Christmas story that could be given to shoppers as a promotional item. Drawing from the tale of the Ugly Duckling and his own childhood experiences (often being picked on for being small and shy), May wrote the story of an underdog reindeer that was ostracized by other reindeer because of his glowing red nose. In 1947, May’s brother-in-law, a songwriter, created the melody and lyrics to "Rudolph the Red-Nosed Reindeer." Two years later, Gene Autry recorded the song. It sold two million copies that year and became one of Autry’s best-selling songs ever. In 1964, May’s story was turned into a beloved television movie that is still a classic today.