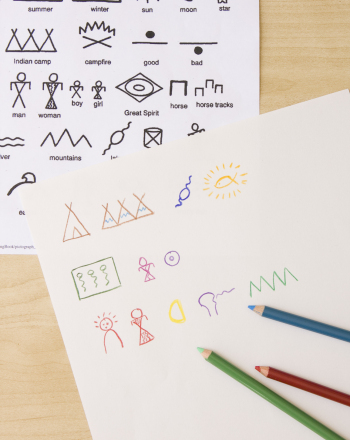 A pictograph is a picture that represents a word phrase, and are our earliest forms of writing. Native Americans wrote pictographs on rocks, cave walls, and buffalo hides to tell stories of battles and communicate important warnings and messages. For example, some Native American tribes believed that animals had spirits controlling them. Prior to a hunt, the Native Americans hosted a ceremony asking the animal spirits to allow them to be taken for food. Game animal pictographs found on some rock art sites may have been left behind from these special ceremonies.

This activity will help your child read and write Native American pictographs, and better understand what life was like back then.