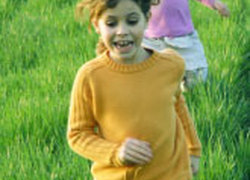 This outdoor game, a modification of "Capture the Flag", uses ball, baskets, and foam to re-enact the fight between the Redcoats and the Patriots in Massachusetts in 1775.

Can your foam-armed "Patriots" stop the "Redcoats" from capturing Concord's armory? You'll find out!

What really happened in Massachusetts on April 19, 1775?

On that day, American colonists in the Massachusetts towns of Lexington and Concord entered a decisive moment in history. Early that morning, British General Thomas Gage sent 700 “Redcoat” soldiers from Boston to capture the Patriots Samuel Adams and John Hancock in Lexington, and to destroy the Patriots’ armory in Concord.

But thanks to the famous warning from Paul Revere (with help from Dr. Samuel Prescott), Samuel Adams and John Hancock were able to escape the night before the battle. When the British troops did make it to Concord on the morning of April 19, 1775, they began seizing gunpowder and arms until the colonists stood their ground at the Old North Bridge at the edge of the town. Astonished by the colonists' resistance, the British tried to retreat back to Boston. However, by that time, colonists from local towns had poured out of their homes and lined the road to fight.

By the end of the day, the British had lost nearly 300 men, and a clear message had been sent by the colonists: the Americans wanted their independence, and they weren’t going to give up the fight. They didn’t, and today, centuries later, we can still thank them for their gift.