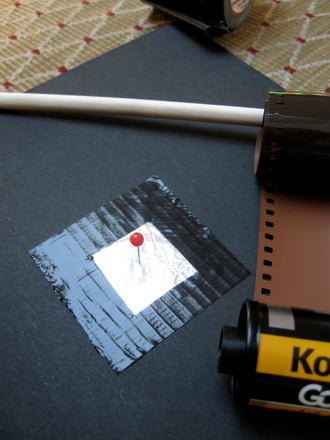 Today, nearly everyone has a digital camera, and it’s easy to take a perfect photograph every time. But like many electronics, cameras may seem mystical and complicated to your child, and they can be expensive too! This project teaches how simple a camera can be, and how light forms an image on the film. It’s an inexpensive project, a great science experience to learn about optics, and a fun art activity, too! Best of all, making the camera is only the beginning.

The pinhole camera was the first camera ever invented, and it’s very simple—made up of only a small aperture, a shutter, a light-proof container, and some film. The images produced are surreal, artsy, and quite unique. To start the activity, you may want to show your child the differences in quality and style between old photographs and today’s images. Your child will be amazed that she can build her own camera and take her own artistic photographs!

Note: Because of the different steps and tools involved, this is definitely a project that your child should do along with an adult.

Now, you’re ready! To take a picture, hold the camera very steady and point it toward what you want to photograph. Open the shutter carefully, so light can reach in your aperture. Use the following guidelines for exposure with ISO 100 or 200 film:

If you want to attach the camera to a tripod, you can simply use a few rubber bands to hold it on.

When you’ve used your roll of film, you can take it to a drug store to develop it, just as you would with a normal film camera. You may want to let them know that you were using a pinhole camera and that your picture sizes may be abnormal, so they can take care when developing them. Hang your photos on the refrigerator, or along the walls in your home to show off your new creations!

Camera Coloring Page
Worksheet
Camera Coloring Page
This preschool coloring page features a camera, film, and two developed photos.
preschool
Worksheet
Crazy for Camera Angles
Worksheet
Crazy for Camera Angles
Camera angles help to tell the story in a movie. Your budding cinephile will read about various camera angles and be inspired to get behind the lens himself!
5th grade
Reading & Writing
Worksheet
Parts of a Digital Camera
Worksheet
Parts of a Digital Camera
For little photographers, learn about the different parts of a digital camera with a fun cut and paste sight words activity!
1st grade
Reading & Writing
Worksheet
Camera Movements in Movies
Worksheet
Camera Movements in Movies
If your kid loves going to the movies, he'll be thrilled to learn about camera movements behind the scenes on this set of reading and writing worksheets.
5th grade
Worksheet
Make a Pinhole Projector!
Activity
Make a Pinhole Projector!
Here's a fun, fast experiment to prove it!
4th grade
Science
Activity
Build A Computer
Science project
Build A Computer
Build a simple computer, following instructions found online. Design a new or improved feature.
Science
Science project
Animal Vision: Ocelli, Compound Eyes, and Camera Eyes
Science project
Animal Vision: Ocelli, Compound Eyes, and Camera Eyes
In this project, learn about animal vision and different kinds of eyes: ocelli, compound eyes, and camera eyes. Find out what a jellyfish or grasshopper sees!
3rd grade
Science project
Build a Sentence
Worksheet
Build a Sentence
Searching for a worksheet that practices sentence building? This printable will challenge your child to build complete sentences.
2nd grade
Reading & Writing
Worksheet
To Build a Fire
Worksheet
To Build a Fire
Explore all the action packed into "To Build a Fire" by building mini version of it!
5th grade
Reading & Writing
Worksheet
Build a Tunnel
Activity
Build a Tunnel
In this science and engineering activity, children will explore types of tunnels and their purposes and then design and build a tunnel of their own.
1st grade
Science
Activity
Build a City: Bus
Worksheet
Build a City: Bus
Need a distraction from all those electronics? Here is a great paper project for you and your child to share: build a city together!
2nd grade
Arts & crafts
Worksheet
Build a Pyramid Parachute!
Worksheet
Build a Pyramid Parachute!
It's a paper parachute brigade! Learn how to build your own parachute, and learn how the parachute was invented over 500 years ago.
4th grade
Science
Worksheet
We enable strictly necessary cookies to give you the best possible experience on Education.com.Cookie policy