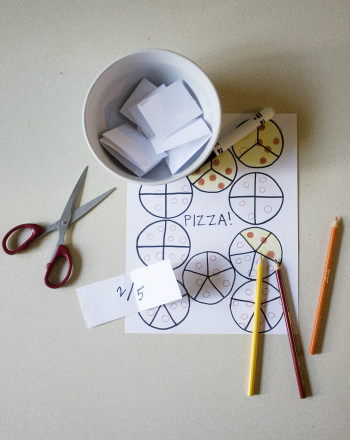 Fractions are tricky to grasp. How is it that 1/2 is bigger than 1/3 when a 3 is bigger than a 2? Once you understand fractions, it makes sense. Until then? It is a big mystery. Help your child see fractions at work as she pretends to gobble up slices of pizza. Make a pizza game board ahead of time, and help your child look at fractions in a whole new way.

Expand on this game by making additional game sheets. Just be certain that the food item is an easily divided shape such as a circle (pizzas, pies, cake) or a square (sandwich or brownie). Try and try again until she can gobble up 2/3 or 3/5 with confidence.