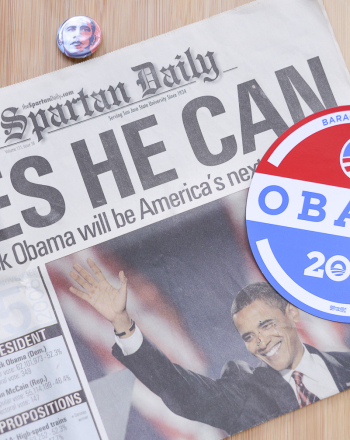 If you're afraid that your tween isn't ready to handle the heavy-duty world of politics, put those fears aside. Experts in the field of political science say children should be regularly exposed to opinions, issues and political figures on both sides. One of the worst things a parent can do for their child's future as a citizen is to shy away from politics.

David Campbell is a Professor of Political Science at the University of Notre Dame in Indiana and the father of two children, ages nine and eleven. Campbell says the best way to give kids a healthy understanding of politics is by showing them to the fun side of politics through high-drama campaigns such as the upcoming presidential race. "Competition is interesting. It draws us all in," he says. Here's a list of his suggestions for parents on how to whet those political appetites.

In the world of "retail" politics, it's not unusual to meet your Senator or member of Congress at town meetings and ribbon-cutting ceremonies. At the next big parade, encourage your child to shake hands with their representatives. They can even ask questions about issues they feel strongly about (the Iraq War, the environment, and school funding are all relevant topics for tweens).

Campbell says technology has made it much easier to expose kids to politics--and most political events can be viewed on YouTube almost immediately. "Get in through the back door by saying to your child 'I want to show you this really cool ad, or this really funny thing this candidate said'," he said.

Just Talk About It:

As a father of a tween, Campbell says kids understand a lot more about what's going on in the world than we give them credit for. "At the tween age, kids are fully able to grasp the idea that there are Democrats and Republicans that have different ideas," he said. One way to familiarize kids with the campaigns is by giving them the biography of candidates in order to bring home to them the idea that these are real people. Campbell warns parents not to avoid the politics discussion because you don't want to be a pushy parent. "If you keep politics sterile, it won't be interesting. Communicate with your child about your political beliefs... The key is not to take it so far that you make your child feel that those who disagree are illegitimate," he said. He said parents should be making sure that schools aren't avoiding the conversation, either. Next time you go to a parent-teacher conference ask the teacher, "Are you talking about the election in class?" or "What material can we cover at home?"

Keeping politics on the front burner is fun for a reason: it makes social studies come alive and shows your child what it means to be an informed citizen.