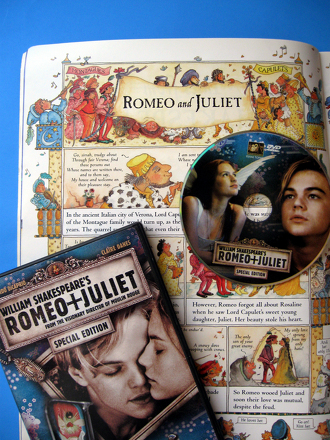 Directors are constantly tweaking Shakespeare's plays in order to make them appeal to modern audiences. Though they often update the sets and the costumes, they rarely change the language, which can be a major roadblock in getting kids to understand and appreciate the Bard. Put your teenager in the director's chair by having her put a modern-day spin on Romeo and Juliet.

Romeo, Romeo, why are you Romeo?*

Deny thy father and refuse thy name

Say no to your dad and change your name

Or, if thou wilt not, be but sworn my love

And I'll no longer be a Capulet

If not, I will change my name, as long as you say you love me.

*In Shakespeare's time, 'wherefore' literally would have meant 'why'. Most printed versions of Shakespeare come with notes that explain the outdated language.

Romeo, Romeo, why do you, of all people, have to be a Montague?

Deny thy father and refuse thy name

Blow off your dad and take a new name

Or, of thou wilt not, be but sworn my love

And I'll no longer be a Capulet.

If you don't do it, I will because I am just that crazy about you.

Fun Fact: Aside from writing the most enduring stories of the Western world, many phrases spoken in Shakespeare's plays are now common sayings in the English language. “one fell swoop”, “dead as a doornail”, and “in a pickle” are all taken directly from Shakespeare.