How to Make a Cartesian Diver 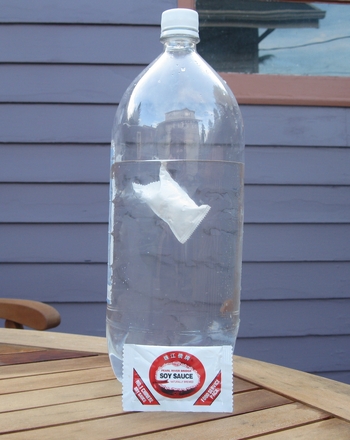 Ever wondered how a submarine can control when it rises and sinks in the water? Build a Cartesian diver to find out! Named after French philosopher and physicist René Descartes, this classic science experiment is a great way for kids to see the principle of buoyancy at work. And with such a simple set-up, it's a fun and inexpensive way to dive into physics!

According to the principle of buoyancy, when an object's weight is less than the weight of the water it displaces, it floats. In this experiment, the density of the soy sauce packet is offset by the low density of the small air bubble inside it, causing it to float. When you squeeze the bottle, however, the increased pressure causes the air bubble to shrink, increasing its density. Since the air bubble is now too dense to keep the packet buoyant, the packet sinks to the bottom.