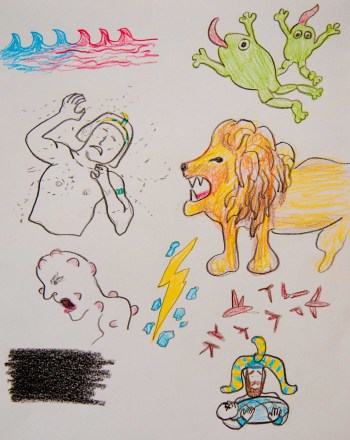 The Ten Plagues represent ten calamities which are mentioned in the Book of Exodus. It's said that Israel's God inflicted these plagues on the Egyptians to force the Pharaoh to release the Israelites from slavery. After the 10th plague, the Pharaoh gave in and the Exodus of the Jewish people began. Every year at the Passover Seder, each plague is mentioned as part of the ritual. To aid your child in paying attention during the Seder, have him create a work of art about the Ten Plagues.

Plague of water turning to blood

Plague of gnats, or lice

Plague of the death of the firstborn

Encourage him to bring his finished drawing to the Seder table to share with others participating in the ritual.