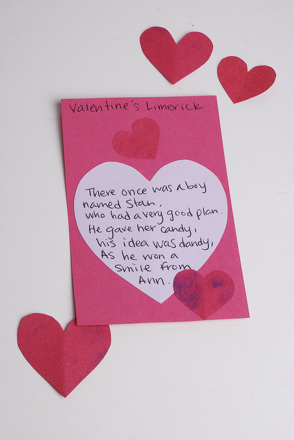 Identifying different types of poetry is an important skill for third graders to grasp. Help your child create a lovely limerick in celebration of Valentine's Day! He'll be introduced to the specific rhythm, rhyme and structure of these catchy, upbeat poems. Your child will delight in creating and reciting these nonsensical poems rooted in 18th century Ireland!

Here is another limerick to try:

There once was a girl named Jill, (3 claps)
who took a really big spill. (3 claps)
She was covered with dirt, (2 claps)
and oh how it hurt. (2 claps)
Just from a fall down a hill. (3 claps)
There was a boy named Ted,
whose favorite color was red.
On Valentine's Day,
no hearts came his way.

So he cried all night in bed.

There once was a boy named Stan,
who had a very good plan.
He gave her candy,
his idea was dandy.
As he won a smile from Ann.