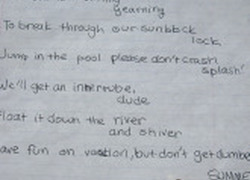 Echo Verse is a type of poetry that's been around since the time of Ancient Greece. In this unique style of poetry, one line is followed by one or two words that rhyme with all or part of the previous line’s last word. Here's an activity that teaches kids to write an Echo Verse of their own. In the process, they get great rhyming and creative writing practice. All they need is pencil and paper, and they're all ready to get their creative juices flowing!

My Pets
My cat scratched me with her paw and said “Meow”
Ow!
My smelly dog then wanted to give me a hug,
Ug!
Baseball
The pitcher wound up the ball and threw it fast,
Blast!
The hitter swung but missed, it was a strike,
Yikes.

When he's all done, have him read his poem out loud for the whole family!