How to Write a Scary Story 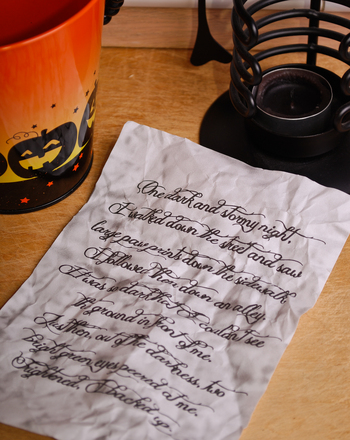 Learn how to write a scary story with this easy and spooky activity! This is a great educational Halloween party game, as it gets everyone talking and contributing to the terrifying plotline. Kids will learn that the secret to creating a great scary story lies in using foreshadowing and good descriptive vocabulary. Storytellers will expand their writing repertoire, exercise creativity, and strengthen analytical skills. This activity is sure to create a real brouhaha at your next Halloween party!

This game can go on and on, usually it just gets more and more hilarious and wild. Especially once you've gotten some practice, kids love to videotape themselves and watch later. But even if you just play this game spontaneously, it's a great tool for fourth grade fiction writing. At this age, kids need to identify and use important tools like setting, character, and description. There's no better way to start building comfort than to play around with people you like, and see what words can do when you put them together creatively. And hey, it's fabulous, sugarless, Halloween fun!

Related Guided Lesson
Based on your interest in How to Write a Scary Story.