Wondering how to teach your second graders about inflectional endings? Look no further. After playing with dice and learning through song, your students will be adding *-ing* and *-ed* like pros.
Download lesson plan

In this reading and writing lesson plan, first and second graders will learn how adding the inflectional endings -ing and -ed can change a word's meaning from present tense to past tense (e.g., walking vs. walked). With the help of two entertaining short videos, teacher-led examples, and a unique dice game, students children will practice adding different inflectional endings to regular verbs while reinforcing important spelling patterns (such as dropping the silent "e" or doubling the consonant).

Students will be able to recognize and write words that contain the inflectional endings -ing and -ed. 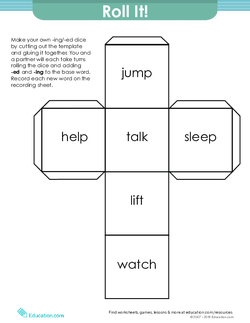