Children learn to use adjectives to describe a variety of feelings in this reading and writing lesson plan designed for first and second grade learners. Using the words mad, sad, happy, glad as a jumping off point, learners will brainstorm a list of other words that can be used to describe character feelings. Then, using their list of words and sentence strips, children will practice describing how the character David felt at different points in the story No, David! by David Shannon, as well as how they have felt in various situations.

Students will be able to identify feelings using a variety of words.

The adjustment to the whole group lesson is a modification to differentiate for children who are English learners.
EL adjustments 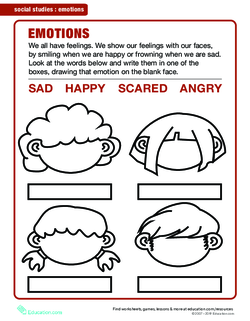 Beginning: Model using pictures to help identify how David is feeling. For example, when David is sent to his room, pause and say, "I'm looking at David's face, and I can tell he looks angry because his eyebrows are slanted down. I think David feels angry because he has to go to his room."

Beginning: Encourage students to use the emotions word wall and anchor chart for support.

Enrichment: Advanced students can copy the prompt in their language journals and write a short story of the incident and the feelings they had.

Support: Struggling students can dictate their sentences to you. Write each one on a sticky note and let them copy it.

Beginning: Encourage students to record the new words in a reading journal or log with visuals.

Intermediate: Prompt students to read their sentences aloud to check for clarity.

Beginning: Ask students to turn and talk to their neighbor and complete the following sentence frame: David felt ____ when ____.