Log in with different email
For more assistance contact customer service
Child and Adolescent Development
Language Milestones Ages 2 to 3
30,000 Words: Is Your Child Getting Enough? 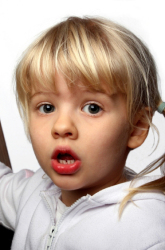 Toddler enrichment classes. Mozart lullabies. Complex educational toys. The news is full of suggestions on how to give children an academic edge. But when it comes to raising successful kids, it may come down to something you can’t buy: words. And 30,000 is the magic number.

Most parents know that they should read to their children, early and often. But few know that speaking to them is just as important to literacy and language success. Betty Hart, Ph.D. and Todd Risely, Ph.D. from the University of Kansas have spent the bulk of their careers studying the effect of talk on kids’ eventual academic achievement. They recorded more than 1,300 hours of interaction between parents and children across the racial and economic spectrum.

What they found is startling. Sure, quality matters when it comes to verbal interaction between parent and child, but it turns out, so does quantity. Their research, published in the benchmark book, Meaningful Differences, shows a direct link between a child’s academic performance in third grade, and the amount of words spoken in their home from birth to age three.

That’s a lot of talk, to be sure. And some parents have the gift of gab more than others. Hart and Risely’s research found that professional parents were more likely to talk enough to reach those numbers than blue-collar or welfare parents. However, kids from families of lower economic status whose parents did talk close to 30,000 words showed the same results as their wealthier peers: better academic success in third grade. That's good news, because it means academic success has less to do with socio-economic status, race, and ethnicity, and more to do with words—which are free.

And what they said really ran the gamut. Many parents spoke what Hart and Risely refer to as “business talk”: things like “Put that down” or “Come here”. Parents that reached or exceeded the 30,000 words a day tended to narrate what they were doing, or chatter at their kids. All the kids, whether their parents were talkative or not, heard language. But by age three, the differences in how many words each child heard was significant: some children had heard over 11 million words per year; others only 3 million.

Hearing the words was only the tip of the iceberg. Hart and Risely found that between 86% and 98% of words in each child’s vocabulary were words also recorded in their parent’s vocabulary. And using those words in daily life gave kids “verbal fluency skills”—in other words, they don’t just observe people talking, they practice. By the time they’re three, kids in the least talkative American families accumulate less than 4 million words of expressive language practice, while the most talkative round up over 12 million words. It’s no wonder they have an edge.

So if you have little ones at home, talk to them. Talk a lot. It may seem silly to gab incessantly, but it can make a big difference. And your third grader will thank you.

Next Article: Development of Metalinguistic Skills and Awareness
We enable strictly necessary cookies to give you the best possible experience on Education.com.Cookie policy