Log in with different email
For more assistance contact customer service
Parenting and Families
Family Entertainment
Are 3-D Movies Dangerous? What You Should Know

Are 3-D Movies Dangerous? What You Should Know 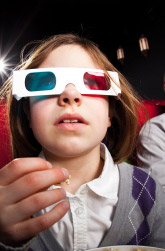 Avatar. Alice in Wonderland. Shrek Forever After. Toy Story 3.  These are just a handful of 3-D motion pictures with wide kid-appeal that have recently hit theaters, bringing moviegoing to a whole new level of excitement and fun. But as 3-D films soar in popularity and prevalence, you may be wondering: are these 3-D blockbusters harmful to your child’s health?

If your child has complained about feeling nauseous or having a headache while watching a three-dimensional flick, she’s not alone. According to Roger Phelps, Ph.D., a VSP Vision Care eye doctor practicing in Ojai, California, roughly 1 in 3 3-D moviegoers may experience temporary symptoms such as nausea, headaches and eye fatigue because of the movie. But does that mean you and your child shouldn’t enjoy any 3-D movies this summer?

Phelps teamed up with the ever-popular and entertaining children’s educator, Bill Nye the Science Guy, to create a series of webisodes teaching people about vision health. Here are some of the common concerns about 3-D movies that Phelps and Bill Nye address:

3-D movies plays games with your depth perception, which could lead to feelings of motion-sickness, dizziness, and disorientation. Here's how it works: the 3-D effect involves using two different cameras projecting two images on top of each other to create the impression of depth perception. Phelps explains that for this third dimension to work, a person must have good binocular coordination, meaning that both eyes must work very well together. But, roughly 30% of people have only marginal binocular vision. For these individuals, their eyes must work harder for the entire duration of the movie, as the brain sends extra impulses to keep the eyes in alignment. Those with marginal binocular vision will feel the extra strain from asking their eyes to fuse in 3-D for lengthy periods of time, which is frequently what leads to feelings of motion-sickness.

On top of that, in three-dimensional films, there is the illusion of depth but the knowledge that the images are flat. That is to say, that the screen is flat but it sends offset images to the eyes, making the images appear to be closer. Yet the body, knowing that the images are still flat, sends conflicting signals that creates confusion.

2. Are children more susceptible to the negative side effects of the 3-D visual experience?

Phelps notes that on the contrary, children seem to be more flexible and able to tolerate the impression of the third dimension better than adults, but that the symptoms can occur at any age. The key factor is whether your eyes have a tendency for the eyes to turn inward or go double, for example, in which case you’re more likely to experience the negative side effects of watching things in 3-D. This can also be exacerbated when you’re tired or fatigued.

3. What about the possibility of more serious responses such as fainting or seizures?

Phelps explains that these types of events can happen in any situation and that it is highly unlikely that a 3-D movie would be a direct trigger.

4. What should you do if your child experiences symptoms during the next 3-D blockbuster she watches?

Fortunately, there are several things you can do to help. Here are Phelps’s tips:

The good news, Phelps assures us, is that 3-D movies are not dangerous and don’t cause any long-term or permanent damage. But whether it’s 3-D movies, computer screens, cell phones, iPods or video games, with screen time for today’s kids steadily increasing, it’s still important to keep your child’s eye health in mind.

Dr. Roger Phelps is a VSP Vision Care eye doctor practicing in Ojai, California. He is passionate about educating others, particularly about diabetes and the importance of eye exams. For more information about his practice, Ojai Eyes Optometry, visit his website.

You can watch Dr. Phelps and Bill Nye’s webisode on the 3D Movie Myth on YouTube or on the VSP blog or Facebook page.