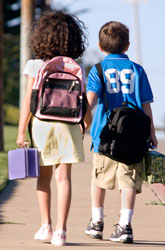 Peach County, Georgia, located in south-central Georgia, near Interstate 75 and Highway 49, was the last of 161 counties created in the state of Georgia in 1924. The county has a population of just under 24,000 people, a trifling amount compared to the 8.2 million in all of Georgia, according to the 2000 U.S. Census.

Yet an interesting thing is happening in this small county that could affect the rest of Georgia, and perhaps other parts of the country: it switched to a four-day school week in response to a nearly $900,000 loss from the county's school budget.

The school system in Peach County is one of about 100 districts out of more than 15,000 throughout the country using a 4-day school week. Many of the rest of the schools on 4-day school weeks are in the rural West, but Peach County sits just a couple of hours south of Atlanta, a test case of sorts for Georgia, during a time when more and more school budgets are getting slashed throughout the country.

The idea of 4-day school weeks is not new. In fact, they have been around for decades, mostly in Western states like Wyoming and Idaho, as a way to fight rising energy prices. More recently, 4-day weeks are a growing  trend in states like Colorado and Minnesota, and are being tested elsewhere in a handful of other states. Like Georgia.

Not many education experts think much of the idea of 4-day school weeks. Randi Weingarten, president of the American Federation of Teachers, the second largest school union in the country, has said the concepts of school reform and 4-day weeks don't mesh.

Though Vermont schools have some money issues, state Commisioner of Education Armando Vilaseca isn't much interested in 4-day school weeks as a money-saver. "I can't imagine speaking to any educator who would agree that fewer days of contact with kids in school will lead to an increase in grades," Vilaseca said.

Similar words come from Diane Cargile, president of the National Association of Elementary School Principals. "The rationale behind the four-day week is not to improve instruction but to save dollars," she said. "That is not what we are about."

But not many people were excited about the prospects of a 4-day school week in Peach County, Ga., either. However, the possibility of losing 39 teachers scared town officials even more. In one week in late July, the 4-day school week and a host of other school savings ideas, like a ban on middle school extracurricular activities and 3 mandatory teacher furlough days, were instituted.

The 4-day school week would feature 10-hour days with kids getting every Monday off. Surprisingly, perhaps, the system wasn't inundated with calls of concern from the parents of Peach County's 8,000 students. "We heard from maybe 25 parents," said Sara Mason, a spokeswoman for the school system. A big help came when several churches and non-profits in the county stepped up to organize a low-cost day-care plan for parents.

So far, the statistics have even surprised Peach County school officials, Mason said.

Of course, the most significant statistic is not yet in, points out Stephen Pruitt, chief of staff for the Georgia Department of Education. There are plenty of school districts in Georgia and elsewhere watching Peach County to see student test results during this first year of 4-days in school.

"I think it's a topic for discussion at a lot of places," Pruitt said. "I think that people are talking about it, I don't know they are ready to pull the trigger."

For now, state officials are taking a wait-and-see attitude, Pruitt said. They are neither in favor of, nor are they against 4-day school weeks. "It would be easy for me to sit here in Atlanta and have my own hypotheses," Pruitt said. "But the bottom line is the people who work in these communities every day are the ones who are best able to make that decision. We are always there to support and guide as necessary."

Pruitt said he thinks the reality of the economy in Georgia will lead others to consider 4-day school weeks if Peach County's test scores are anywhere near as positive as the other statistics coming out so far. Revenue was cut this year for  Georgia schools and the outlook for the next two years isn't great.

"I think school districts are going to be looking at all possibilities to save money. If they can do something they feel will not hurt the kids, they will consider it seriously."

The test scores in Peach County will have a lot to do with the possible spread of 4-day school weeks in Georgia and elsewhere, officials agreed.

"Right now, it's too new for us to make any real judgments about it - there has been no testing in those areas (with 4-day school weeks)," said Cargile. "How is achievement affected by that? (But) if the tests are good, then hey, maybe we need to take a look at that."