50 Books Your Child Should Read Before Kindergarten 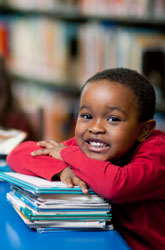 A reading list, for kindergarten? Though they're not exactly required reading, these 50 books, both old and new, make a top-notch reading that young kinders shouldn't miss. They run the gamut from read-alouds that parents can share to early reading practice, and deal with topical subjects (like fear of school), skills kids should master (such as the alphabet), and, of course, flat-out fun! So hunker down and get reading!