9 Reasons to Let Your Kids Lose 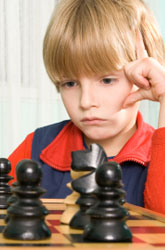 Have you ever bent the rules of a board game so your kids wouldn't lose? Slowed down during a backyard race so your child is first to the finish line? That impulse makes sense at first blush. An adult can handle a loss at Go Fish much more easily than your average preschooler. Letting your child win protects her from feeling bad.

But as it turns out, research tells us that losing games is good for children, and helps them develop into empathetic, well-adjusted people.

If your child reacts to losing by pouting or throwing game pieces on the floor, it might be hard to remember that the experience is for his own good. However, getting through a minor loss now has benefits in the long run.

Coping skills. The world is a competitive place. As Carter notes, losing in a board game at home with a parent is much easier for a child to handle than experiencing her first loss in a public place, like a competition in front of her kindergarten class. Kids who have practice losing learn how to be good sports. "If they don't lose, they're being set up to not be able to cope," says Carter, director of the parenting program at The Greater Good Science Center at the University of California-Berkeley.

Learning from mistakes. If a game requires specific skills or strategies, losing gives children a chance to analyze how they might have done better. Jon Oliver, co-author of Lesson One: The ABCs of Life, compares this to athletes who watch videos of past games to spot weaknesses in their play. "Every day we make a mistake and we learn from it," he says. "If you make a mistake, what do you do the next time?"

Self-confidence. Children might improve their skills so they'll get better at a game they've lost, but as a result they'll learn new things. Becoming more knowledgeable builds their belief in themselves and pride in their abilities. Plus, they'll learn that performing well comes from giving their best effort.

Empathy. Kids can't identify with others who are going through a loss if they've never had that experience. Every time your child loses a game, he receives a little lesson in the fact that everyone has to struggle through life, whether that means studying to get an A on a test or persevering through soccer practice before scoring the perfect goal. "We feel empathy by feeling hurt ourselves," says Melody Brooke, a marriage and family therapist in Texas.

Self-control. No child can get her way all the time. Losing sometimes shows kids that they can't expect good things to be handed to them, and that they have to behave well around others or risk being labeled a sore loser. Oliver notes that like any skill, losing with grace takes practice.

Joy in having fun. Children with the ability to handle a loss can have a good time playing a game even if they don't win. "The most important thing is that it's not about the outcome," Carter says.

Life is full of chances to show kids that losing isn't the end of the world.

Admit mistakes. Be open with your children about your own errors and how you fix them. This shows that no one is perfect. "Every day we all make mistakes. Maybe you're making a recipe and you forgot an ingredient," Oliver says. "As adults, we have to be vulnerable about it."

Keep score – sometimes. Carter suggests maintaining a balance between the number of times you keep score in games and the number of times you don't. "You can just send the message that we're just here having a good time," she says. "It's also a way to prevent a loss." But if you never keep score, she says, your kids won't learn what losing is like.

Challenge them. Encourage your children to get better at everyday tasks. Play a game that's a bit harder than they've played before or assign them a household chore. "Give them challenges at home that are maybe beyond their abilities, and let them see that they can learn to do it," says Brooke, author of Oh, Wow! This Changes Everything!

Brooke adds that kids who are never allowed to lose can grow up anxious and depressed. They've never learned to cope when life doesn't go the way they've planned. "On the inside, they don't understand what is going on," she says. "They feel that the world is somehow harming them."

But learning that it's possible to lose a game and get though the day intact goes a long way toward preparing kids for real life.

"Our job as parents is not to make our children happy," Brooke says. "Our job is to help them to be happy in the world."