A Few Good Men in the Classroom 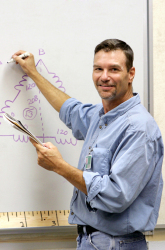 The U.S. Marines aren't the only ones looking for a few good men. While female teachers have dominated elementary schools for quite some time, the ratio of men to women in the classroom has steadily declined over the past two decades. Nowadays, only about 9 percent of elementary school teachers are male.

What's keeping men away? According to the National Education Association (NEA), one big reason is the salaries of teachers compared to other professionals. It's probably not a coincidence that states with the highest teacher salaries tend to have the highest percentage of male teachers.

Other reasons for the shortage, according to educational experts and men themselves, include:

Many men who do become teachers find that they are not expected to stay in the classroom for long. People often assume they are just using the experience as a stepping-stone to a higher position. Some male teachers have even reported receiving advertisements in their mailboxes for positions as principals and administrators—notices that female colleagues did not get.

While hiring and retaining male teachers may not be easy, studies show the effort can have a large pay-off, especially by helping boys to view school as a male-friendly place. In fact, research done by Swarthmore professor Thomas Dee and published in the journal Education Next raises the possibility that the academic gap between boys and girls might be narrowed by exposing boys to more male teachers.

For parents interested in adding more gender diversity to the classroom, here are a few ideas:

Just as women have made great strides in many male-dominated fields, it is time to encourage men to break the elementary school gender cycle. For as we find a few more good men to teach our children, we might just find that we turn out a few more excellent men in years to come.

Next Article: What Is Teacher Tenure?
We enable strictly necessary cookies to give you the best possible experience on Education.com.Cookie policy