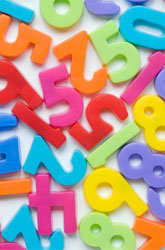 Every parent of a preschooler knows about those colorful magnetic letters that stick to the fridge (not to mention littering every other surface in the house). But however annoying cleaning up those little ABCs might be, the magnetic alphabet can provide many amazing opportunities for preschoolers to interact with letters and build a foundation for literacy learning.

Magnetic letters provide opportunities for hands-on learning which are much more suited for the way young children learn than workbooks and flashcards. "Manipulating materials allows young children to actively construct knowledge using their senses, rather than merely passively taking in and repeating rote information," says Deanna Zerr, President of Unlimited Options and former President of the Colorado Association for the Education of Young Children. “When children manipulate the letters, it adds to their memory processing and enhances their ability to recall the letter in written form later,” says Julie Duffy, Pre-Kindergarten teacher at Shepherd of the Hills Christian School in Colorado. “The child is having great fun - you are interacting with their learning and newfound reading abilities emerge!”

So round up those magnetic letters and try a few of these fun, multisensory activities to help your preschooler master important early literacy skills:

Visual Discrimination is the ability to differentiate similarly shaped objects, and is an important early reading skill. For example, children must be able to see the differences between E and F or C and G before beginning the process of learning letter names and sounds.

Letter Recognition is the ability to recognize and name each of the letters of the alphabet. While this is an important pre-reading skill, it will take repeated practice to master.

These ideas will help your put your magnetic letters to good use by building a foundation for literacy success for your little learner. These skills do not come naturally to children, but repeated exposure and playful practice will produce long term benefits as a child begins to read. The possibilities for practice are endless, so once you have tried these tips out, get creative for added alphabet practice!

Next Article: A Parent's Guide to Phonics
We enable strictly necessary cookies to give you the best possible experience on Education.com.Cookie policy