What You Didn't Know About the Ancient Olympics 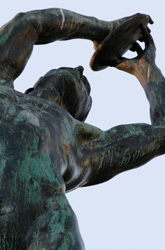 The Olympic Games are coming up, and much of the world will be enjoying the performances of the very best athletes of today. However, the ancient origins of this modern day event are probably not on your family’s radar. Sure, you know that there were olive wreaths involved, but how much can you share with your child about the Ancient Olympics? Incorporate some learning into the action and excitement by sharing the history of the Olympics with your child. Here’s a cheat sheet about the ancient tournament that’s sure to surprise your young learner!

History The Ancient Olympics lasted about 1,000 years–from 776 BC to AD 395, although the site of the official Games in Olympia had been a sacred place for prayers and festivals for years beforehand. The village of Olympia may seem remote today, but in ancient times it was easily accessible from the sea through rivers and other inland routes. From simple altars of offerings, the site grew to include giant temples, halls, a stadium, swimming pool, and numerous statues—including one of the seven wonders of the world: a gold and ivory statue of the god, Zeus.

The first Olympic Games were religious festivals, held amidst a time of truce in a war-torn land to honor Zeus with festivities and demonstrations of skill in athletics and music. In ancient days, Greece was not its own nation but a collection of city-states often in conflict –if not full out war – with each other and neighboring nations. According to tradition, King Iphitos of Elis, near Olympia, sent a messenger to run the great distance to the oracle at Delphi to ask how to end the destructive wars and disease that were plaguing his people. Her answer was to reinstate a games festival at Olympia, and to declare a truce of all conflicts so that athletes, judges, and viewers could travel safely to and from the games. This truce was extended to three full months every four years to accommodate all those traveling by land and sea to Olympia.

The word “athlete” comes from the Greek, and means “one who competes for a prize”. While some ancient tournaments awarded the winners with shields, woolen cloaks, or olive oil, the oracle at Delphi advised that the winners at Olympia should receive a simple wreath of leaves from the olive trees growing nearby.

The Athletes The ancient Games at Olympia were contests for Greek-speaking men only, and they practiced and competed in the nude. Some say this was to be sure that women did not sneak into the Games as athletes or viewers, and others say this was adopted from the Spartan tradition. In fact, women had their own athletic competitions in ancient Greece, called the Heraia. At Olympia, the Heraia was held every four years to honor the goddess Hera with foot-races as well as prayers, offerings and festivities.

The ten months prior to the Games was a period of intense practice for ancient athletes first in their home city-states, and the last month at a training site in Elis, about 40 miles from Olympia. A strict regime of training and diet was imposed under the supervision of each athlete’s own trainer as well as the officials. Two days before the Games, a parade of judges, athletes, trainers, horses, chariots, owners and jockeys traveled the long distance on the Sacred Road to Olympia.

The Games The festivities and events in Olympia were quite different from those that take place today. At first there was only a foot race, but over the years new events were added, often accompanied by music from flutes or drums. The first day’s contest included heralding and trumpeting, along with boys’ races. Public and private prayers were offered at ceremonies at the altars and statues of Zeus, and speeches, poetry, and music were presented. The morning of the second day began with the dramatic and exciting horse-drawn chariot races, and in the afternoon, the ancient pentathlon (javelin, discus, wrestling, running and jumping) contests were held, followed by much feasting and revelry. The next days’ events included running races, boxing, and wrestling, and ended with a race-in-armor. Finally, the victors were crowned with wreaths of wild olive leaves at the Temple of Zeus and the celebrations continued long into the night. Afterwards, the participants traveled back to their home city-states within the safety of the continuing time of truce.

After 1,000 years, a string of natural disasters struck Olympia, and the ancient Games came to an end. Nearby rivers flooded the site, and a series of earthquakes destroyed the sanctuary. The rubble completely obliterated the remains, which were only discovered late in the 18th century and excavated 100 years later. Today, visitors to Olympia can tour the ancient site and even go through the tunnel to the ancient stadium just as the ancient athletes did so many years ago.

Today, the Olympic Games begin with a huge spectacle of music, movement, lights and fireworks. The Olympic Games take place every two years, alternating between winter and summer athletic events.

While our modern games are very different from those of ancient times, some things haven’t changed. The world still suffers from regional conflicts. The Olympic Truce is still alive today, in concept. For this year’s Olympics, the United Nations has unanimously asked the world to once again acknowledge the Olympic truce, guaranteeing safety and protection to the athletes and observers of the Olympic Games.