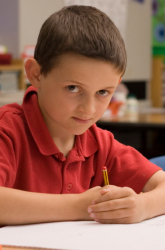 There is a growing body of evidence showing that boys in the United States and Canada are less enthusiastic about school than boys were 20 or 30 years ago. In fact, there are an increasing number of male students who have developed a distaste for everything related to school. What’s changed in American education over the past 30 years?

In a word: kindergarten. Imagine walking into an American kindergarten 30 years ago. You would have seen kids doing lots of different things: singing, dancing, playing, fingerpainting, and maybe even a little formal instruction. Walk into almost any kindergarten today – particularly in public schools – and you will see something quite different. You will see kids sitting down, listening to the teacher, and learning how to read and write. As I argue in my book, Boys Adrift, the kindergarten of today looks very much like first grade looked 30 years ago. So is this acceleration of the early elementary curriculum a good thing or a bad thing?

I think it’s a bad thing.

The American school system used to be the envy of the world. But in recent years, American students have not been performing very well, when compared with kids from other nations. Some of that may have to do with the fact that other countries start children in school later than we do.

How could starting kids in school two years later explain their superior performance in international standardized assessments? Look no further than the brain. By starting school two years later, and teaching kids material when it is developmentally appropriate for them to learn, kids are less likely to hate school. If kids don't hate school, it's easier to get them to learn. If kids do hate school, as many American boys do, then the teacher is starting out with a major handicap before even stepping into the classroom.

Waiting until seven years of age to begin the formal, "rigorous," reading and writing curriculum of today's kindergarten might reduce or ameliorate a significant fraction of the problems we see with boys and school. For many boys, there's a huge difference in readiness to learn between when that boy is age 5 and when the same boy is age 7 - just as there's a huge difference in readiness for a girl who's 3 years old and the same girl at age 5. Regions of the brain develop in a different sequence and tempo in girls compared to boys. As a result, most five-year-old girls are better able to adapt to the rigorous academic character of kindergarten than five-year-old boys are.

Many parents understand intuitively that the accelerated pace of the 21st-century American kindergarten is not a good match for their 5-year-old son. Particularly in affluent neighborhoods, it's become common for parents to enroll their son in kindergarten one year later than the district would normally enroll that child. In affluent districts, it's not unusual to find that half the boys, or more, are enrolled in kindergarten at age 6 rather than at age 5; in low-income neighborhoods, on the other hand, typically fewer than 3 percent of boys will be held back. One reason that boys from low-income neighborhoods are doing so much worse may be simply that the boys from more affluent neighborhoods are starting school at a later age.

This practice of starting school a year later—called kindergarten red-shirting—may be a better solution for some boys. Give that boy an extra year to be a kid before he has to undertake the academic grind of 21st-century kindergarten. That extra year may prevent him from deciding, very early, that school isn't for him.

The key to success in kindergarten is to do the right thing at the right time. Imagine a farmer in Iowa. The farmer may have the best seed corn in the world, and the best farmland – but if the crop is planted during a January blizzard, the result likely will be a failure. Expecting a 5-year-old boy to sit still and be quiet for hours on end may, for some boys, be similar to planting that crop in January. It’s not developmentally appropriate. The end result, too often, is a boy who hates school and everything that reminds him of school.

If you're not 100% sure what is best for your son, I suggest that you give him an extra year of childhood. That could mean staying in preschool for another year, or paying for a private kindergarten that is truly a kindergarten, and doesn't present first grade curriculum. Doing something earlier doesn't mean that you do it better. It may mean that you do it less well, in the long run.

Next Article: Physical Milestones: Kindergarten
We enable strictly necessary cookies to give you the best possible experience on Education.com.Cookie policy