Log in with different email
For more assistance contact customer service
School and Academics
Politics and Education
New Secretary of Education Arne Duncan: What It Could Mean for Kids

New Secretary of Education Arne Duncan: What It Could Mean for Kids 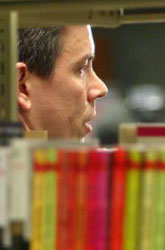 President-elect Barack Obama has promised America a “new vision” for a 21st century education system, and the person he has selected to lead that vision is superintendent of Chicago schools Arne Duncan.

As Secretary of Education, Duncan will be tasked with turning around No Child Left Behind, closing the achievement gap, finding and retaining high-quality teachers for America's classrooms, and ensuring that graduates have the 21st century skills needed to compete in the global economy.

Obama says Duncan is well-equipped to tackle these issues head-on: “When it comes to school reform, Arne is the most hands-on of hands-on practitioners. For Arne, school reform isn’t just a theory in a book – it’s the cause of his life. And the results aren’t just about test scores or statistics, but about whether our children are developing the skills they need to compete with any worker in the world for any job.”

Since 2001, Duncan has run the Chicago School District, the third largest in the country, with a focus on transforming weak schools, closing failing ones, and improving teacher quality. He is known as an innovative reformer, who has called for high quality education as the key to fighting poverty, strengthening the economy, and promoting opportunity. “It is the civil rights issue of our generation and it is the one sure path to a more equal, fair and just society,” Duncan says. “While there are no simple answers, I know from experience that when you focus on basics like reading and math, when you embrace innovative new approaches to learning, and when you create a professional climate that attracts great teachers -- you can make a difference for children."

As the political pundits debate Obama's latest in a series of bold appointments, parents and educators in the field are wondering what this will mean for America's kids. Here is where Duncan stands on the leading education issues of the day:

No Child Left Behind
Duncan has said he supports the law's mission of accountability, though more flexibility may be required. Some have criticized Duncan for what they call a heavy-handed approach to accountability in Chicago. Teacher's unions balked when Duncan closed schools in Chicago, replaced entire faculties, or forced staff to reapply for their positions.

But, Obama says, while some of these reforms are unpopular, the truth is that the status quo is not working for America's kids. “We cannot continue on like this,” Obama said. “It is morally unacceptable for our children – and economically untenable for America. We need a new vision for a 21st century education system – one where we aren’t just supporting existing schools, but spurring innovation; where we’re not just investing more money, but demanding more reform; where parents take responsibility for their children’s success; where we’re recruiting, retaining, and rewarding an army of new teachers; where we hold our schools, teachers and government accountable for results; and where we expect all our children not only to graduate high school, but to graduate college and get a good paying job.”

Bruce Fuller, Ph.D., Professor of Education and Public Policy at the University of Berkeley says Duncan's selection shows that Obama will place school improvement high on the domestic policy agenda. “Mr. Duncan will have the new president's ear. He mirrors the president-elect's style of governing: get all sides around table, listen carefully, and experiment with meaningful reforms,” Fuller says. “While tough-headed he's rarely antagonistic, nor a kick-butt, take no names kind of reformer .”

College Funding
Though he will be responsible for higher education policies that help prepare students for college both academically and financially, Duncan has limited experience in the higher education sector.

Early Childhood Education
In the last eight years, Chicago has increased the number of low-income children who have access to pre-kindergarten programs. Advocates of early childhood education say they are confident that Duncan will swiftly execute Obama's plans to provide universal preschool to all.

Improvements to Science, Math and Technology Education
Duncan's track record in Chicago has shown a commitment to improving student access to 21st century technology. In 2004, Duncan and city officials launched a new program under which a public school called Virtual Opportunities Inside a School Environment (VOISE) was opened. VOISE is dedicated to technology education—students are given laptops in the classroom and those without home computers are provided one.

Teacher Quality and Retention
When it comes to getting high-quality teachers in the classroom, Duncan has shown he wants to think out of the box. He shut the Dodge Renaissance Academy on Chicago's West Side, a once failing school, and reopened it as an experimental teacher-residency program for those seeking advanced degrees in education. The experiment seems to have worked; since the school reopened in 2003, the number of students meeting state standards at the school has more than tripled.

Duncan has initiated pay for performance incentives for both teachers and students in Chicago, and has sought backing from groups traditionally opposed to merit pay, such as teacher's unions.

Obama said that Duncan has the skills and experience to put high-quality teachers in the classroom. “He’s worked tirelessly to improve teacher quality, increasing the number of master teachers who’ve completed a rigorous national certification process from 11 to just shy of 1,200, and rewarding school leaders and teachers for gains in student achievement,” Obama said.

How Duncan's policy ideas might affect classrooms in the next four years is up for grabs. “He's got to hit the ground running,” Fuller says. “We'll find out whether this former basketball professional has remained in good shape.”

But, one thing is sure: the appointment has served to renew Obama's commitment to improving education in America. "In the next few years, the decisions we make about how to educate our children will shape our future for generations to come,” Obama said in a statement about Duncan's appointment. “At a time when companies can plant jobs wherever there’s an Internet connection, and two-thirds of all new jobs require a higher education or advanced training, if we want to out-compete the world tomorrow, we must out-educate the world today.”

Duncan's appointment will now go to the Senate for confirmation.

Next Article: Obama's Budget Delivers on Education
We enable strictly necessary cookies to give you the best possible experience on Education.com.Cookie policy