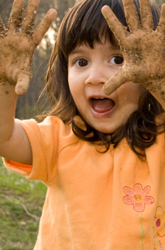 "Mom, I'm bored! I need something to do." While this might be a common refrain these days, parents of a generation or two ago would likely have answered the complaint with "Go and find something to do yourself." Today's parents often change the answer to "Well, Bob the Builder's on in ten minutes", or "We're leaving for soccer practice soon."

There's no doubting that what kids fill their time with has changed pretty dramatically over the past decades. David Elkind, author of The Power of Play, writes "Children's play – their inborn disposition for learning, curiosity, imagination, and fantasy – is being silenced in the high-tech, commercialized world we have created. Toys, about which children once spun elaborate personal fables, now engender little more than habits of passive consumerism. The spontaneous pickup games that once filled neighborhoods have largely been replaced by organized team sports and computer games."

Experts are now acknowledging that the loss of creative childhood play is having some negative consequences. Creative play develops imagination and creativity – tools which are now recognized as important down the road in higher levels of math and science – as well as intellectual, social and emotional development.

Aside from child overweight and obesity figures, which seem to be rising relentlessly each year, the lack of creative play (which is often active play) also seems to be having an impact on emotional and cognitive development. Studies have shown that kids who are involved with plenty of self-directed creative play develop better abilities to regulate their own behaviors and emotions, compared to other children. Creative play gives kids a change to practice policing themselves. "Creativity and imagination are like muscles; if you don't use them, you lose them," Elkind says.

So what can parents do to help strengthen their child's creativity and imagination through creative play? Here are a few tips:

Unstructured, creative play is often seen as a waste of time, since the child doesn't appear to be "learning" anything. So don't feel guilty about allowing so much "free" time – research shows that time spent in creative play is not really "wasted" after all.

Next Article: What Children Learn Through Play
We enable strictly necessary cookies to give you the best possible experience on Education.com.Cookie policy