According to the School Psychologist: 1st grade 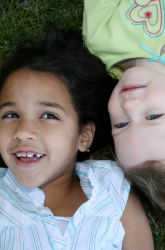 Sometimes a first grader can sound like a broken record, stuck on the two ditties, “Can I have a juice box?” and “I want mac and cheese!”  Sound familiar?  “The average first grader uses about 2,500 words and their sentences usually contain about seven,” states Dr. Laurie Zelinger, Ph.D., noted school psychologist.  Considering the amount of words a child in this age range has at his disposal will likely quadruple (at least) by the time he reaches his teen years, it’s easy to understand how frustrating it can be for a first grader to attempt to communicate his thoughts and feelings.

Combine the first grade child’s lack of defined, nuanced vocabulary with his undeveloped sense of self-control and inability to tolerate failure in himself, and a picture begins to emerge. No wonder this year can be so trying for both children and parents.  First grade is also often the year when peer pressure makes its first appearance in a child’s life.  Children begin to observe their friends more closely and mimic the play styles of others.  At this age, “peers, television, and siblings begin to have a great influence on children, as the amount of time spent with them begins to equal time spent with parents,” states Dr. Zelinger.  Not only will children begin to copy the behaviors and play of their friends, but they will also begin to evaluate themselves in relation to their peers.

“While cross-gender ‘best friends’ account for 36% of friendships at age four, this number has declined to 23% by the time children reach age six,” notes Dr. Zelinger.  It is important to remember that the crushes or attractions on members of the opposite sex that may develop in children as young as six or seven years of age feel very real to the child experiencing them.  Don’t belittle your child’s feelings or engage in teasing, as this may result in your child feeling embarrassed and hiding his feelings.  As he gets older, you’ll want him to feel he can approach you with issues regarding members of the opposite sex.  It is never too early to establish an open, trusting dialogue.

First grade parents can best help their children weather what can be a bumpy (but exciting) year by focusing on making sure the child has a solid, familiar routine that allows him to get enough sleep, play out of doors, bathe and keep his room tidy, and practice any skills or hobbies in which he has taken an interest.  Help your child allay feelings of frustration at not being able to do things exactly right the first time by reminding him of all the things he is able to do this year that he could not do the year before (ride a bike, help with the dishes, read all by himself, etc.).

According to Licensed Marriage and Family Therapist and Parenting Coach Lori Landau, the need for a solid night’s rest at this age cannot be overstated.  Children of this age need approximately ten hours of sleep.  Landau states, “My favorite saying is that every good day starts with a good night of sleep.”  A sound piece of advice, not just for first graders, but their often exhausted parents as well.

Download Article
Next Article: Early Childhood Screening: What's It All About?
We enable strictly necessary cookies to give you the best possible experience on Education.com.Cookie policy