Log in with different email
For more assistance contact customer service
Preschool
Academic Preschools: Too Much Too Soon?

Academic Preschools: Too Much Too Soon? 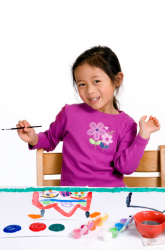 Once upon a time, many children didn’t attend preschool at all, and those who did spent their mornings cutting, pasting, and playing house. These days, preschool is a rite of passage, and “academic” preschools that promise to prepare kids for the cutthroat world of kindergarten are becoming more and more popular. But are they a good idea?

Not really, say many experts. “Research…shows that academic preschools offer children no long-term advantages academically, but make them more anxious,” says Roberta Golinkoff, author of Einstein Never Used Flash Cards: How Our Children Really Learn and Why They Need to Play More and Memorize Less.

While every preschool is different, there are some traits the best ones share, according to Martha E. Mock, assistant professor at the University of Rochester Warner School of Education. “Young children learn best through meaningful interaction with real materials and caring adults and their peers, not through the drilling of isolated skills,” she says.

Child development experts say that children in academic preschools often learn math and reading at the expense of their social skills. Kids from play-based programs usually catch up academically, while kids from academic backgrounds may never catch up socially. This can be devastating to their self-esteem.

Not surprisingly, supporters of academic preschools heartily disagree. “Children at that early age are like little sponges, and the more information you can expose them to, the better,” says Shirley Mace, administrator at the Stratford School in Los Gatos, California, who points out that the schedule includes time for play. Nonetheless, she adds, the program is “not for an overly active child…[it’s best for one who can] sit and focus for 20-30 minutes.”

Plenty of parents say their kids are up for that challenge. “He's very curious, asks a lot of questions, understands things at a deep level – overall [he’s] cognitively advanced for his age,” says one mother whose son attended an academic preschool. Contrary to the stereotype of pushy parents, many families send one child to an academic preschool and their siblings to a traditional play-based school, depending on their personalities. Others choose three days per week at an academic program and two days per week at a play-based school, hoping to achieve the best of both worlds.

Whether you feel your child will thrive best in an environment with dress-up corners and sand tables, or one with a regular academic curriculum, the good news is, there’s plenty of choice out there. Just make sure that in addition to any worksheets, there’s plenty of time for free time. Because play should be a major component of every child’s day!