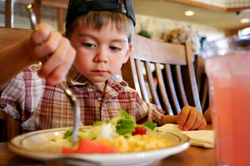 A fresh spinach smoothie might not sound that appealing, but it shouldn't be life threatening. For almost three-year-old Kyle Allgood, it was. He couldn't handle the E. coli lurking in the drink his mother prepared for him, and he died.

Kids are especially sensitive to foodborne illness, and in the past year, there's been plenty of it to go around. Spinach, green onions, bagged lettuce – it seems like the headlines are full of stories on risky produce. What's the deal? Is it actually more dangerous to eat vegetables today than it was a few years ago?

Actually, yes. These days, Americans are eating more vegetables, that's the good news. But they're depending on mixes, rather than just making salads from a head of lettuce, or a stir fry from a hunk of broccoli. And if one leaf or type of vegetable in the mix is contaminated, the whole bag, especially after being shaken around in transit, becomes contaminated, too.

You can't always do something to prevent your family from getting sick. That's because even when certain vegetables are washed, the bacteria can remain. That said, here's what to do to tip the odds in your favor:

Keep It Cool: Putting food in the fridge or freezer stops most bacteria from growing. If you've got leftovers, follow the "Rule of 2": Refrigerate leftovers within 2 hours of cooking, or throw them away. Store food at a shallow depth –about 2 inches – to speed chilling. Use stuffing and gravy within 2 days. (Other leftovers can last 4 days.) After that, throw them out.

Keep It Clean: Wash your hands for 20 seconds with warm soapy water before and after preparing any food. Wash fruits and vegetables under running water just before eating, cutting, or cooking, even if you plan to peel them. Triple-washed bagged produce needs no further washing. But it should be said that washing with water or produce wash usually won't remove stubborn bacteria on lettuce leaves or mixed greens.

Make It Hot: Cooking food at 160 degrees F will kill any E. coli.

Strip It: Remove the outer leaves of heads of leafy vegetables like cabbage or lettuce.

Drink With Care: Choose only pasteurized milk, juice, or cider.

Portions of this article were reprinted with permission from Fear of Fresh, Copyright 2006, Nutrition Action Healthletter by Center for Science in the Public Interest. www.cspinet.org

Next Article: Is Chicken Dangerous?
We enable strictly necessary cookies to give you the best possible experience on Education.com.Cookie policy