Log in with different email
For more assistance contact customer service
Learning and Your Child
Creativity
Art Milestones: What's Typical at Each Stage of Life

Art Milestones: What's Typical at Each Stage of Life 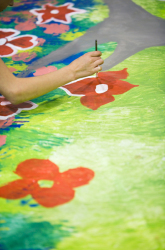 Children are born artists. At least according to art therapist Rhoda Kellog, author of the book Analyzing Children's Art. No one teaches an infant to scribble. Yet, for almost every young child, scribbling happens naturally. And it's as crucial a step for a child to take in learning graphic language, as babbling is to an infant's learning to speak.

Over time, a one-year-old's ability to scribble will evolve into what the preschooler deems “art.” While every child develops at his or her own pace, there are certain milestones typical on the journey. Here’s what parents can look for:

Ages 2-3: By the time they hit three, young children often have a capacity for controlled scribbles, and sometimes even create early human forms. These tend to look more like tadpoles than people and usually consist of a circular shape that doubles as both head and body, paired with matchstick legs. Somewhere between the ages of three and four, children enter what art therapist Victor Lowenfeld described as the pre-schematic phase.

Ages 4-6: In the beginning of this phase of pre-symbolism, which usually lasts until kindergarten or first grade, children begin drawing early human shapes that often leave out little details – like arms, for instance. University of Florida art professor Craig Roland says it's not a cause for concern. Children frequently overlook such features quite unintentionally.

As your child advances through the pre-symbolism phase, shapes and images of things around her will begin to appear in her drawing. But don't be surprised to see a house on top of a ball and a sun next to the child's head. In this Alice in Wonderland world, all of the elements are taking shape but nothing is quite where you expect it to be.

Ages 7-9: By the time they reach the age of seven, most children have developed their own unique way of drawing a variety of popular images such as a sun, a person, hair, and grass. Human forms now contain necks, shoulders, legs, and feet. Lowenfeld calls this the schematic phase, as once a child develops a way of drawing an object, his schema for that object will be repeated again and again. Children introduce a baseline into their work and they begin to organize objects on the page in a logical way.

Still, even though your child has developed a schema and follows it most of the time, don't be surprised if he slides back now and then. It isn't unusual for children to work in two different stages of drawing at one time, or even to occasionally slip all the way back to scribbling.

Whatever you do, don't get too hung up over measuring your child's milestones. Christine Thompson, professor of Art Education at Penn State University, says that a lot depends upon the environment. The most important thing parents can do is to provide kids with opportunities and reasons to use graphic languages, just as we stress the importance of a literacy-rich environment for children who are getting ready to read and write.

Next Article: Multiple Intelligences: Understanding Your Child's Learning Style
We enable strictly necessary cookies to give you the best possible experience on Education.com.Cookie policy