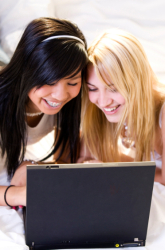 Stfu lol pos bbiab td2m l8r k thx bi. Can you understand the previous sentence? If you have a teenage son or daughter, you should know how to understand it – they do!

It's called Internet slang, or "netspeak," and it's quickly becoming part of your teenager's everyday routine. Due to strict message length limits and tiny keyboards, almost all text messages are written in what could be classified as an entirely different language.

As a concerned parent, chances are pretty good that you're already familiar with the basic rules of teen computer use. You keep the computer in a highly trafficked room, monitor what websites your kids visit, add them to your buddy list, and have filters installed to block out all the nasty stuff you don't want them to see. These are the basics of being responsible when it comes to letting your teens on the Internet, but sometimes they're not enough.

Even with all that technology in place, many parents are shocked when they find out just exactly what their kids are chatting about on the web. Whether they're trying to disguise their actions or merely attempting to save a few keystrokes, today's teens are increasing their use of Internet slang while many parents continue to remain ITD (in the dark).

The easiest way to stay ITK (in the know) about what your kids are doing online is to learn their language. Reading your child's instant messenger profile, MySpace page, or Livejournal won't be very helpful if you can't understand what they're talking about.

With so many types of Internet slang being used it can be hard to keep up. But Internet lingo isn't too hard to understand, once you get the hang of it. The simplest form involves replacing words with similar sounding characters. For example: too becomes 2, are becomes R, see becomes C, and words ending in -ate (like translate) are shortened to transl8.

Most kids use Internet slang to save keystrokes and sound cool, but there are a few key words that every parent should be on the lookout for. Here's a list of some common warning signs that all parents should learn to recognize:

Many of these terms may seem scary, but not all teens use Internet slang for naughty purposes. The most common terms are just ways of shortening common sayings. Here are some of the most common everyday terms:

Is Internet slang hurting teens academically? Some parents think so. Teachers complain about lingo like "LOL" showing up on written reports. They're also troubled by the fact that more and more students don't know the difference between words like its and it's, or you're and your. Writing just isn't the same as it was 20, or even 10 years ago.

On the other hand, teens are using language on a constant basis–whipping off emails and communicating in the written form with tremendous regularity. And one thing's for sure: while Internet slang may or may not be affecting their grammar skills, it is encouraging our kids to be more cre8ive.

If you'd like to learn more about Internet slang, go to www.noslang.com for information and a free Internet slang translator. For technophobes, they also sell a printed slang dictionary for under $10.