Log in with different email
For more assistance contact customer service
Outside the Classroom
Volunteering and Citizenship
Can a 10-Year-Old Change the World?

Can a 10-Year-Old Change the World? 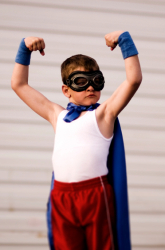 Collect This Article
4.2 based on 13 ratings
by Education.com

Kids across America are learning that one person can make a difference –- not by hearing that they can, but by actually being that one person. It all started with a feisty ten-year-old named Talia Leman, who watched the Katrina devastation on TV and decided to do something about it. She launched an online campaign to convince kids just like her to give up candy for Halloween and instead, collect money door-to-door.

Sure, there were big donations. Robert R. Lazar Middle School in New Jersey sent a check for $52,500. Koelch Elementary in Idaho raised another $35,000. But mostly, those millions were made up of scores of tiny donations –jars of pennies and emptied piggybanks. Car washes and garage sales. Kids sold cookies and helmed lemonade stands. They read Talia's words on her website, "You don't have to be a grownup or have money to help. All you have to do is want to help." And they listened.

According to the Corporation for National Community Service, volunteering has hit a 30-year high. Since 1989, adult participation has risen sharply – it's up more than 32%. But teenage participation puts that number to shame –- it's more than doubled in the same time frame. And kid volunteering with educational or youth service organizations like the Boy Scouts, the Girl Scouts, or 4-H, has shot through the roof. It's up 63%.

Talia's group, now called RandomKid.org, has raised over $10 million dollars for hurricane relief so far – way more than many fat cat corporations. They call it the "Power of Anyone," urging kids to recognize that while they may be small, they can still help bring about big change.

Talia Leman, RandomKid.org's 11-year-old CEO says, "Just start with something little. Pick up the candy wrapper on the sidewalk, or recycle pop cans and donate the money to something. It feels great to help others."

Anne Ginther, the adult advisor and President of RandomKid, says children are naturally attuned to what is unfair in the world. They notice big problems, but may need a parent's encouragement to figure out how they can make a difference. "Take advantage of everyday opportunities to be a role model and to encourage your children to help others. When you drop money in the Salvation Army bucket, explain to your children why you're doing it, and what it's for. When you drive under an overpass and see people living on the side of the freeway, talk about it. Ask your child what he or she thinks could be done to help."

Most importantly, show kids that every little bit helps and that you don't have to be rich or powerful to make a difference. Ginther recalls a Halloween party in which RandomKid held a big party for kids, so they could gather and dump their change. "We cheered for the children like they were superheroes. I'll never forget one little girl sheepishly coming forward to dump her change. I excitedly asked her how much she thought she collected. She looked down at the floor, "I think only like four quarters," she said. "That's outstanding," I cheered. "You know why? Because you did something! Do you know that if every child who trick-or-treated in America did what you did, we'd have more than $52 million dollars to help rebuild the Gulf?!"

"The little girl's whole body practically levitated. Her eyes were bright as she walked with confidence up to the change machine and dumped in her four quarters to rousing applause," Ginther says.

One child can make a difference. They may seem awfully small trying to do something as big as rebuilding the Gulf, but as Talia has proven, a lot of "littles" equals one great big.

Next Article: Kids and Philanthropy
We enable strictly necessary cookies to give you the best possible experience on Education.com.Cookie policy