Cheap Jewelry May be Hazardous for Kids 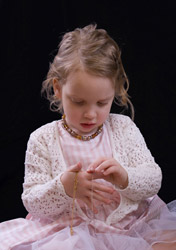 A professor of chemistry at Ashland University in Ashland, Ohio, is warning retailers and consumers that many inexpensive jewelry items such as charm bracelets, key chains, and necklaces may be dangerous for kids.

Dr. Jeffrey Weidenhamer and a group of his chemistry students at Ashland University analyzed a collection of inexpensive jewelry from local stores in Ohio and found that the majority of items vastly exceeded the U.S. Consumer Products Safety Commission (CPSC) guidelines for lead, which can be extremely harmful to children.

Intrigued, they expanded the study, to include 154 jewelry items from 12 different retail chains across the states of Ohio, Delaware, Florida, Michigan, and Washington. What they found surprised them. The CPSC says lead should not exceed 0.06 percent by weight, but almost half of the items tested were heavily leaded, exceeding 80 percent by weight. In other words, they were more than 1,300 times as lead-laden as they should have been. The average lead content for all items tested was 46 percent, way above CPSC guidelines. And 11 out of 12 retail stores had at least one heavily leaded item.

Lead is a highly toxic metal that causes a range of health effects, especially in children, who absorb more lead in their systems than adults. According to the Environmental Protection Agency, lead can cause a huge range of serious problems for children – damage to brain and nervous systems, slowed growth, hearing problems, headaches, and learning issues such as hyperactivity.

Because young children commonly touch things and then touch food, or suck on fingers, they are at the highest risk. Lead poisoning from inexpensive jewelry led to the death of a 4-year-old a few months ago. Weidenhamer is pushing for a nationwide ban on toy jewelry containing more than 0.06 percent lead.

"Our hope is that this research will create more awareness among retailers and consumers," he says. Regardless of whether or not the ban goes through, parents should be aware of the problem, especially if they have young children, who routinely put jewelry in their mouths.

Everyone looks for good prices when they're shopping for their kids, but jewelry might be one place to resist the cheap stuff.

For more information, and to view the complete report, see Dr. Weidenhamer's website at www.ashland.edu/~jweiden.

Next Article: Crazy for Castles!
We enable strictly necessary cookies to give you the best possible experience on Education.com.Cookie policy