Chinese Food: Healthy or Not? 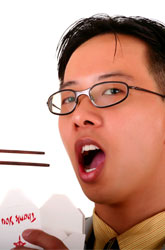 Collect This Article
2.8 based on 6 ratings
by Education.com

Collect This Article
What’s hiding in your Kung Pao Chicken? According to a survey by the Center for Science in the Public Interest (CSPI), lots of salt.
Popular Chinese restaurant meals quite frequently have as much as an entire day’s worth of sodium and some meals have twice that, says CSPI. The good news though, is that while the typical American-style restaurant meal has expanded almost as fast as the typical American waistline, Chinese restaurant meals have not—they are about the same size, same fat, and same number of calories than when CSPI tested them several years ago.
How much damage you do at the table depends a lot on what you order. Here are a few things to keep in mind, next time the urge hits:
Appetizers: Skip the spare ribs. CSPI found them to be the least healthy appetizer on the menu, ringing in at 600 calories, 14 grams of saturated fat, and 900 mg of sodium for one 4-rib order. Choose a Spring Roll (100 calories) over an Egg Roll (200 calories).
Vegetables: Sadly, the amazingly delicious Eggplant in Garlic Sauce packs a punch of 1,000 calories and 2,000 mg of sodium. Better choices include Buddha’s Delight (a mix of stir fried vegetables) or Szechwan String Beans, both at half the calories of the eggplant.
The Main Event: As a whole, shrimp dishes are usually amongst the healthiest on the menu. They’re still high in salt, but calorie-wise, Szechwan Shrimp and Shrimp with Garlic Sauce both have about 700 calories and Shrimp with Lobster Sauce only has 400. Lemon Chicken, on the other hand, has a whopping 1,400 calories and 13 grams of saturated fat--- the same as three McChicken sandwiches and a 32-ounce Coke at McDonalds. If you want chicken, go with Black Bean Sauce—the dish has 700 calories and less sodium than any other menu item CSPI analyzed. And for heaven’s sake, stay away form the Orange Crispy Beef! Instead of 1,500 calories a pop, you’ll consume 900 if you go for Beef with Broccoli instead.
Noodles and Rice: Yikes! These side dishes add quite a bit of caloric weight to a meal and not much nutrition. According to CSPI, they’re nothing more than “a load of greasy, refined carbs”. Whether Fried Rice or Chicken Chow Fun, Lo Mein or some other noodle entity, these sorts of dishes usually weigh in at 1,100 to 1,500 calories a pop.
So what’s the takeaway? Chinese food is still better for you than meals found at most other restaurants because the dishes tend to be loaded with veggies and lean meats. As long as you stay away from the deep fried entrees, it’s mostly the salt that’s a problem here.
Stick mostly with stir-fried shrimp or chicken. Don’t slurp up all the extra sauce. And “don’t waste your calories on greasy noodles and fried rice,” says Bonnie Liebman, CSPI’s Director of Nutrition. Then go forth and eat. And make use of the doggie bag!
Next Article: Developing Healthy Eating Behaviors
We enable strictly necessary cookies to give you the best possible experience on Education.com.Cookie policy