Log in with different email
For more assistance contact customer service
Outside the Classroom
Internet, Children, and Teens
Computers: How and When to Get Your Child Started

Computers: How and When to Get Your Child Started 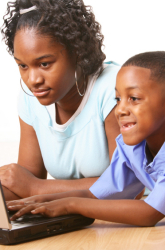 Too much of anything is never good, especially when it comes to children watching television. With childhood obesity rates soaring, it’s clear that kids are spending too much time in front of the TV. But what about that other box?

Computers are such a part of our everyday lives that it seems natural to want to get our children started on them early. But when is the right time, and how long should they be in front of that “other” screen?

While it’s certainly not a requirement for children to know how to use a computer before entering kindergarten, the fact is, many do. Part of that has to do with access. According to a Kaiser Family Foundation report released in 2006, titled "The Media Family: Electronic Media in the Lives of Infants, Toddlers, Preschoolers, and Their Parents," 8 out of 10 (78 percent) children 6 years old and under live in homes with a computer, and about 7 out of 10 (69 percent) have Internet access from home.

Why then? In general, it’s between the ages of 2 and 3 that children begin to develop the cognitive ability to use a computer mouse. Many parents decide that this is an appropriate age to get their kids started. By no means, however, is it set in stone. If a child is interested and shows the ability to manipulate the mouse, look for software with skill-building exercises that ask children to think creatively and perform problem-solving tasks.

According to Jinny Gudmundsen, an editor of Choosing Children’s Software magazine, it is wise to start children on the computer with short and easy activities to play since their attention spans are also short. Blues Clues Preschool Learning System and Disney’s Learning Preschool are wonderful learning tools for a child just starting to use the computer and just starting to understand spelling, early math, and phonics.

Spending time on the computer is a way for kids to start growing comfortable with the technology that will most certainly be a regular part of their life. Knowing how much is too much, is up to you.